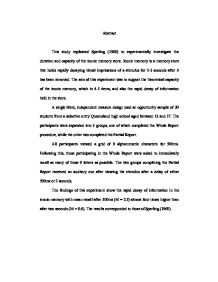 Abstract This study replicated Sperling (1960) to experimentally investigate the duration and capacity of the iconic memory store. Iconic memory is a memory store that holds rapidly decaying visual impressions of a stimulus for 2-3 seconds after it has been removed. The aim of this experiment was to support the theoretical capacity of the iconic memory, which is 4-5 items, and also the rapid decay of information held in the store. A single blind, independent measure design used an opportunity sample of 30 students from a selective entry Queensland high school aged between 13 and 17. The participants were separated into 3 groups, one of which completed the Whole Report procedure, while the other two completed the Partial Report. All participants viewed a grid of 9 alphanumeric characters for 500ms. Following this, those participating in the Whole Report were asked to immediately recall as many of these 9 letters as possible. The two groups completing the Partial Report received an auditory cue after viewing the stimulus after a delay of either 500ms or 2 seconds. The findings of this experiment show the rapid decay of information in the iconic memory with mean recall after 500ms (M = 2.3) almost four times higher than after two seconds (M = 0.6). The results corresponded to those of Sperling (1960). Contents Abstract 2 Introduction 4 Design Method 5 Participants 6 Apparatus/Materials 6 Procedure 7 Results 7 Discussion 8 References 11 Appendices A - Participant Consent Form 12 B - Participant Information Sheet 13 C - Participant Stimuli 14 D - Standardised Instructions 15 E - Standardised Letter Recall Sheet for Participants 16 F - Participant Debriefing Sheet 17 G - Raw Data for all Participants 18 Introduction The cognitive approach of psychology attempts to scientifically clarify the internal mental processes responsible for memory encoding, storage and retrieval. The first widely accepted model of memory (Atkinson and Shiffrin, 1968) ...read more.

experimental results. Discussion The aim of the experiment was to replicate Sperling's (1960) study on iconic memory and support the theoretical capacity of the store. The results of this experiment support Sperling and the findings of the original experiment. The mean recall of the PR with a delay of 500ms was higher than recall with a 2 second delay and in accordance to Sperling's theory on the rapid deterioration of iconic memory. Sperling's paper on iconic memory suggested that in the WR procedure the total capacity of the iconic memory is be 4-5 items. Supporting this, the mean number of letters recalled in the WR in this experiment is 4.1. When participants recall characters in the PR, Sperling argued that an interaction between the echoic and iconic memories allowed for the storage of a small amount of information for up to 30 seconds after a stimulus was removed. This is due to the internal auditory rehearsal of the stimuli. These findings are supported by the results of this experiment in which, after a 2 second delay between the delay offset and the cue, participants are still able recall 1-2 letters from the original stimulus. To determine whether the letters recalled in this group of PR participants was from only the iconic memory, or a combination of both the echoic and iconic memory stores, further experimentation would be needed. Additional measures of the IV should be implemented after display offset delays of larger than 2 seconds, however less than the predicted 30 seconds that this information is available. Additional measures of the IV would also monitor the decay in the iconic memory, as well as the point at which recall plateaus, either with complete deterioration of the iconic memory or the introduction of auditory rehearsal. This experiment was conducted under laboratory conditions, in a synthetic environment, and therefore lacks ecological validity. In saying this, the variables are well controlled and accurately manipulated and therefore can be isolated. ...read more.

Are there any questions? Present the PowerPoint Slideshow Group three, two seconds after the grid of letters is flashed on the screen you will hear a tone that is either low, medium or high pitched. Are you all able to clearly distinguish between the three tones or would you like them played again. The nine letters on the screen are arranged into three rows, and the pitch of the tone will alert you as to which line of letters you are to focus on and recall. For example, the high pitch tone corresponds to the top line of letters. Immediately after the letters have been flashed on the screen you can write down the letters you recall from the specified row. Are there any questions? Present the PowerPoint Slideshow Appendix E Write down the letters you recall below in the correct order Please do not write your name on this sheet of paper Appendix F Debrief (delivered verbally to participants) Thank you for your participation in this experiment. The aim of this experiment was to investigate the duration of the iconic memory by replicating Sperling's experiment which was done in 1960. Iconic memory is part of the sensory memory which is memory store in the brain that holds a raw, unprocessed visual impression of a scene for 2-3 seconds which is lost unless reinforced. If this information is reinforced, for example through rehearsal using the auditory memory, it progresses to your short term memory. Are there any questions more about the experiment? If you would like the general results of this experiment please don't hesitate to email us. For confidentiality reasons you cannot retrieve your own, nor anyone else's, individual results. Appendix G Whole Report Partial Report (500ms Delay) Partial Report (2 Second Delay) Number of Letters Recalled by Participants 3 2 1 4 3 2 4 3 0 4 1 0 4 2 1 4 3 2 4 3 1 4 3 1 4 2 0 6 1 1 ?? ?? ?? ?? 4 Meredith Lambert Iconic Memory ...read more.