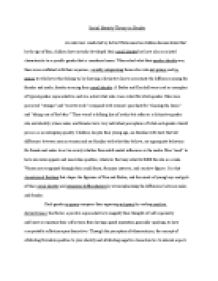 ﻿Social Identity Theory in Gender An interview conducted by Advert Enticement on children demonstrated that by the age of four, children have not only developed their social identity but have also associated characteristic to a specific gender that is considered norm. When asked what their gender identity was, there were confident with their responses, socially categorizing themselves into out-groups and in-groups to whichever they belong to, by drawing a distinctive line to accentuate the difference among the females and males, thereby assuring their social identity. A Barbie and Ken doll were used as exemplars of typical gender representatives and was asked what roles were suited for which gender. Men were perceived "stronger" and "went to work" compared with women's penchant for "cleaning the house" and "taking care of the baby." ...read more.

Each gender in-group compares their opposing out-group by seeking positive distinctiveness that favors a positive representative to magnify their thoughts of self-superiority and boost or maintain their self-esteem from having a good reputation; generally speaking, to have a respectable reflection upon themselves. Through the perception of ethnocentrism, the concept of attributing favorable qualities to your identity and attributing negative characteristics to internal aspects for out-group members, one would favor attributions that would impact them in a positive way and detest those that don't. In-group bias or favoritism is seeking qualities to enhance a better, more positive perception of themself. One of the boys in the interview stated, ?boys are better than girls? showing in-group favoritism. ...read more.

Out-group homogeneity is assuming that out-group members are more alike to one another than in-group members, who think of themselves as more diverse. Though the children aren?t well informed of the complexities between males and females, they understand the physical basis through simple gender stereotypes that narrow their minds into seeing their out-group as uniform. There are only minor evidence to show in-group favoritism and social comparison in the group of children interviewed, however there are several signs of positive distinctiveness stemmed in their self-concept that seek superiority over the out-group. But with the feeding information of gender generalizations that emphasize intergroup differences, one is more likely to find growing ethnocentrism through a perception of category accentuation by exaggerating the intergroup differences and intragroup similarities. This explains the intergroup behaviors exhibited in society that employ in-group bias and the cold inferior traits appointed to their out-group by discriminatory prejudice. ...read more.