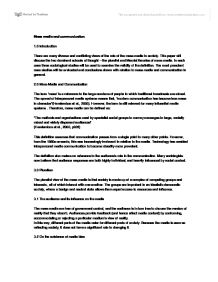 The Basic Mechanisms of Homeostasis Overview of homeostasis The term homeostasis was first coined by Walter Cannon in 1929 to literally mean steady state. It describes the dynamic equilibrium by which internal constancy is maintained with

Mass media and communication 1.0 Introduction There are many diverse and conflicting views of the role of the mass media in society. This paper will discuss the two dominant schools of thought - the pluralist and Marxist theories of mass media. In each case three sociological studies will be used to examine the validity of the definition. The most prescient case studies will be evaluated and conclusions drawn with relation to mass media and communication in general. 2.0 Mass Media and Communication The term 'mass' is a reference to the large numbers of people to which traditional broadcasts are aimed. The spread of interpersonal media systems means that, "modern communication has become less mass in character"(Haralambos et al., 2000). However, the term is still relevant for many influential media systems . Therefore, mass media can be defined as: "The methods and organisations used by specialist social groups to convey messages to large, socially mixed and widely dispersed audiences" (Haralambos et al., 2000, p935) This definition assumes that communication passes from a single point to many other points. However, from the 1980s onwards, this was increasingly irrelevant in relation to the media. Technology has enabled interpersonal media communication to become steadily more prevalent. The definition also makes no reference to the audience's role in the communication. Many sociologists now believe that audience responses are both highly individual, and heavily influenced by social context. 3.0 Pluralism The pluralist view of the mass media is that society is made up of a complex of competing groups and interests , all of which interact with one another. The groups are important to an idealistic democratic society, where a benign and neutral state allows them equal access to resources and influence. ...read more.

There is an era-dependent basis for the study. The work depends upon the accessibility of opinions. In the 1940s the general public would have had access to far fewer sources of information than today. Under such circumstances it is likely that opinion leaders in the community became especially influential. This was the case during the rise to power of the National Socialist (Nazi) party in Germany during the 1930s. In spite of the increased accessibility of the media, Katz and Lazarsfeld's research is still highly influential. Advertisers and spin-doctors recognise that 'the best form of advertising is word-of-mouth advertising'. In British politics there are notable examples in the 1992 and 1997 elections. Both parties developed strategies that saw local opinion leaders armed with 'ammunition' to support arguments at micro levels such as the pub and workplace 4.0 Marxism In 'The German Ideology (1846), Marx asserts that "the ruling ideas are the ideas of the ruling class". Applying this to Marxism, the media are the means by which the ideas of the ruling class maintain their dominance as the ruling ideas (Haralambos & Holborn, 2000, p937). The Marxist view was dominant in Britain and Europe from the mid 1960s to the mid 1980s, and is still used in modern research. Although less dominant now, Marxism still affects much media research. 4.1 Classical Marxism Generally, the Marxian view of media influence depends on an understanding and elaboration of the operation of the notion of ideology. In Marxist texts, ideology is used in an entirely negative sense to refer to a supposedly dominant ideology, which supports the interests of the dominant class. The idea of domination is central to Marxism and is seen as a tool of the dominant classes, misleading and illusory. ...read more.

to have an overbearing influence on his research. This leads to a situation being evaluated in terms of one perspective, when an alternative perspective would be more relevant. For example, in their pluralist explanation of the mass media, Katz & Lazarsfeld (1955) are ignoring the Marxism based role of, for example, economics in influencing the general public. The source of funding will affect many aspects of the sociologist's work, but most critically whether the work is actually completed. A source will only continue to fund if the sociologist continues to provide work in line with their expectations (which may be sociologically balanced or biased). For example, if Gross (2002) failed to provide balance in his work, he would eventually lose his academic sponsorship. Political constraints can take two forms. The constraint can either be imposed on the researcher or affect work that he is reviewing. For example, in the former instance, sociologists working within the former USSR would have their work constantly monitored. There would be restricted access to government bodies, and the work would have to be reviewed by government before publication. Any works which gave a negative impression of the government/Communism would be heavily amended or simply not published. For authors reviewing the former USSR, they will have to evaluate doctored statistics and reports. Therefore, they will be forced to use their own judgment - reducing the scientific nature of their report. 6.0 Conclusion The Marxist and Pluralist perspectives provide viable explanations of the mass media for the cases above. However, for the general mass media, the Neo-Marxist and hegemonistic approaches are the most viable approaches of those discussed. However, in order to rationally evaluate the role of the modern mass media one should use the most modern models. This means recourse to Stuart Hall's remodelling of Gramscian Cultural Hegemony and Fairclough's Discourse Analysis. 7. ...read more.