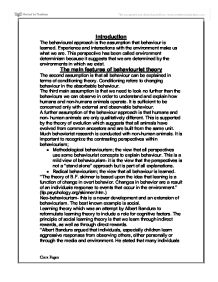 The behavioural approach is the assumption that behaviour is learned. Experience and interactions with the environment make us what we are. This perspective has been called environment determinism because it suggests that we are determined by the environm

Introduction The behavioural approach is the assumption that behaviour is learned. Experience and interactions with the environment make us what we are. This perspective has been called environment determinism because it suggests that we are determined by the environments in which we exist. The main features of behaviourist theory The second assumption is that all behaviour can be explained in terms of conditioning theory. Conditioning refers to changing behaviour in the absorbable behaviour. The third main assumption is that we need to look no further than the behaviours we can observe in order to understand and explain how humans and non-humans animals operate. It is sufficient to be concerned only with external and observable behaviour. A further assumption of the behaviour approach is that humans and non- human animals are only qualitatively different. This is supported by the theory of evolution which suggests that all animals have evolved from common ancestors and are built from the same unit. Much behaviorist research is conducted with non-human animals. It is important to recognize the contrasting perspectives within behaviourism; * Methodological behaviourism; the view that all perspectives use some behaviourist concepts to explain behaviour. ...read more.

is credited with the theory of ''operant conditioning.'' Skinner developed an apparatus which allowed him to observe and record the frequency of an animal behaviour (now called the Skinner box). Skinner found that when a hungry rat was placed in the box, it would engage in random behaviour. Eventually, purely by accident, the rat would press the lever. At this point, the rat was automatically reinforced with a food pellet. Skinner discovered that if food was present the level was pressed more frequently. However, if a mild electric current, was given to the rat when the level was pressed, level-pressing decreased significantly. He recognized that he could influence the animal's behaviour. Skinner defined a reinforcement as anything that increases the frequency of response. Positive out comes to children behaviour. Negative outcomes to children behaviour. Behaviourist use an ABC approach to understanding behaviour. * A stands for antecedents; what is happening just before it occurs. * B stands for behaviour; what the person is actually doing. * C stands for consequences what happens next. ...read more.

It has been used to control problem behaviours such as aggression and disorders such as phobias. It is based on the assumption that what is leaned can be unlearned. There is no doubt that conditioning both classical and operant is a fundamental part of psychological explanations and of great benefits to the health and social care perspective. Behaviourist approaches are used by a wide range of practitioners e.g. clinical and used by a wide range of practitioners e.g. clinical and educational psychologists, physiotherapists, occupational therapists, speech and language therapies, teaching and learning assistants, nurses and care workers. Social skills training is also related to learning theory and may be the only way to skills, such as teaching autistic child some basic self-care. Broad best (1961) argued that behaviourism is the best method of rational advance in psychology. However there is negative criticisms that are leveled at the behavioural approach. It suggests that criticism is not true of social learning as a more active participant in their experiences. The behavioural approach is also reductionism reducing complex behaviour to stimulus - response links. However, these weaknesses are also strengths because they enable behaviourism to be highly appropriate for experimental research, which is needed in health and social care. ?? ?? ?? ?? Ciara Fegan ...read more.