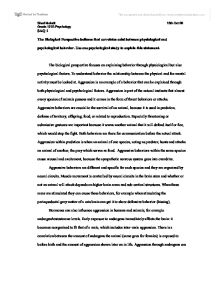 The Biological Perspective believes that correlates exist between physiological and psychological behavior. Use one psychological study to explain this statement.

SAQ 1 The Biological Perspective believes that correlates exist between physiological and psychological behavior. Use one psychological study to explain this statement. The biological perspective focuses on explaining behavior through physiological but also psychological factors. To understand behavior the relationship between the physical and the mental activity must be looked at. Aggression is an example of a behavior that can be explained through both physiological and psychological factors. Aggression is part of the natural instincts that almost every species of animals possess and it comes in the form of threat behaviors or attacks. Aggressive behaviors are crucial to the survival of an animal, because it is used in predation, defense of territory, offspring, food, or related to reproduction. ...read more.

Muscle movement is controlled by neural circuits in the brain stem and whether or not an animal will attack depends on higher brain areas and sub-cortical structures. When these areas are stimulated they can cause these behaviors, for example when stimulating the periaqueductal grey matter of a cats brain can get it to show defensive behavior (hissing). Hormones can also influence aggression in humans and animals, for example androgen/testosterone levels. Early exposure to androgens immediately affects the brain: it becomes reorganized to fit that of a male, which includes inter-male aggression. There is a correlation between the amount of androgens the animal (same goes for females) is exposed to before birth and the amount of aggression shown later on in life. ...read more.

This shows that there is truth in the biological perspectives claim. Both psychological and physiological factors are to be looked at when trying to understand behaviors such as aggression. One psychological factor is neural control, where the cerebral cortex, the perceptual system, the sub-cortex, the brain stem and the muscle system are involved in causing aggressive behavior. One physiological factor that ties into this is the amount of testosterone (androgens) in an animal which correlates with aggressive behavior shown later in life. Aggressive behavior can also be influenced by the environmental factors that the individual is exposed to (most cultures tolerate aggression in boys. All these factors play are significant and can lead to aggressive behavior. Shari Mahrdt 15th Oct 09 Grade 12 IB Psychology Shari Mahrdt 15th Oct 09 Grade 12 IB Psychology ...read more.