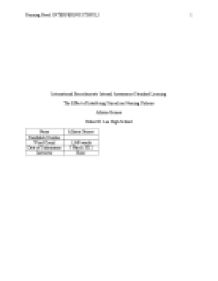 The Effect of Interfering Stimuli on Naming Colours Experiment.

﻿Running Head: INTERFERING STIMULI International Baccalaureate Internal Assessment Standard Learning The Effect of Interfering Stimuli on Naming Colours Allison Gomes Robert E. Lee High School Name Allison Gomes Candidate Number Word Count 1,349 words Date of Submission 5 March 2012 Instructor Biser ________________ Table of Contents Abstract Introduction Method Design Participants: Materials Procedure Results Discussion References Appendices: ________________ Abstract The experiment was conducted to prove if conflicting stimuli is responsible for a delay in the reaction time taken to name colours..This experiment was based on Stroop?s experiment, from which it was mostly replicated. The independent variable is the colour stimulus, or the colour of the ink. The dependent variable was the time taken to name all the colours, or the reaction time. The first test was conducted by providing a chart of words with names colours, written in the same colour of ink (TestC). The second test showed a chart of words with names of colours, written with a different colour of ink (TestE). According to the results, it was more difficult to name the colour of the ink from the second chart than the first. This interference is caused by the introduction of a conflicting stimulus, which inhibits attention, and blocks the flow of automatic reading. ...read more.

The independent variable was the stimulus of the colour of the word provided, and the dependent variable was the reaction time of the participants when naming the colour of the word. The participants were, at first, briefed about the experiment, and its proceedings. Then, once they agreed, they signed the consent form which explained their rights throughout this experiment, and then were asked whether they had any questions, or not before proceeding. Then, the experiment was conducted, after which the participants were debriefed. They were told that they could contact the e-mail address provided at the end of the consent form, in case the participants had any concerns. Care was taken to ensure that the participants were not caused any psychological and/or physiological harm. The briefing/debriefing notes were standardised, to act as a control variable. Participants: The target population was students of a Northern Virginia high school, who were willing to participate in this experiment. They were required to be over 16 years old, so as to not require paternal consent, and available during the time of the experiment (i.e. given consent to take part in the experiment by their teacher). Opportunity sampling procedure was used to pick an even number of students, which ended up giving seven males, and seven females (n=14). ...read more.

This slight difference could be attributed to bilingualism - bilinguals tend to take longer to name the colour of the ink than monolinguals (Rosselli et al, 2002). The participants were not chosen based on their linguistic skills, and these skills could play a role in the level of interference. Therefore, linguistic skills may need to consider this cultural aspect in future replications of this study. Also, it was assumed that English is the first language of all the participants; however this may have not been the case. The participants were asked to read the words from left to right, top to bottom, as the reading pattern is in English. However, other languages such as Arabic and Chinese are read in a different pattern, for example from right to left and up and down, respectively. These could increase the level of interference for the participants, as then they would have been forced to read in an order different than that of their natural inclination. It is recommended that the next time this experiment is conducted, most of the participants should at least have English, or another language that reads in the same pattern as English as their first language, to prevent discrepancy in the results. ...read more.