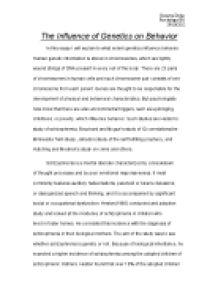 The Influence Of Genetics On Behavior

﻿Demetra Dokas Psychology IB1 29/10/2012 The Influence of Genetics on Behavior In this essay I will explain to what extent genetics influence behavior. Human genetic information is stored in chromosomes, which are tightly wound strings of DNA present in every cell of the body. There are 23 pairs of chromosomes in human cells and each chromosome pair consists of one chromosome from each parent. Genes are thought to be responsible for the development of physical and behavioral characteristics. But psychologists now know that there are also environmental triggers, such as upbringing, childhood, or poverty, which influence behavior. Such studies are Heston?s study of schizophrenia, Bouchard and Mcgue?s study of IQ correlations,the Minnesota Twin study, Jahoda?s study of the self fulfilling prophecy, and Hutching and Mednick?s study on crime and others. Schizophrenia is a mental disorder characterized by a breakdown of thought processes and by poor emotional responsiveness. It most commonly features auditory hallucinations, paranoid or bizarre delusions, or disorganized speech and thinking, and it is accompanied by significant social or occupational dysfunction. Heston(1966) conducted and adoption study and looked at the incidence of schizophrenia in children who lived in foster homes. ...read more.

They found that the closer the kinship, the higher the correlation for IQ. Another twin study that supports the statement that intelligence is genetic is the Minnesota Twin Study (Bouchard et al. 1990). In this study, MZA?s( identical twins raised apart) and MZT?s (identical twins raised together) were compared. Each twin completed around 50 hours of testing and interviews. Bouchard found that 70% of intelligence can be attributed to genetic inheritance. This study has many strengths and weaknesses. The strengths are that there were participants from all over the world and that the mean age of participants was 41 years old. The limitations were that Bouchard relied on media coverage to recruit participants, there were some ethical concerns about the way he reunited the twins, and there was no way to establish the frequency of previous contact between the twins. In contrast to these two studies, there are studies that show that environment has a greater influence on genetics. Scarr and Weinberg (1977) and Horn et al. (1979) studied parents who had raised both adoptive and natural children. ...read more.

This shows that the naming of children has resulted in a self fulfilling prophecy. Hutching and Mednick?s (1975) study of criminal behavior proved otherwise. They studied criminal activity in biological and adoptive fathers and their sons. They found that if both the adoptive and biological fathers had criminal records, 36.2% of sons also did; if only the biological father was criminally active, 21.4% of sons also had criminal records; and if only the adoptive father had a criminal record, it dropped to 11.5% of sons. When neither father was a criminal, 10.5% of sons were. This study shows the importance of genetics in combination with environmental factors in the development of criminal behavior. According to the studies mentioned above, both genetics and environmental factors influence behavior. Heston showed that schizophrenia is mostly genetic. Bouchard and McGue and the Minnesota Twin Study found that intelligence is genetic, but Scarr and Weinberg and Horn disproved them showing that intelligence is mostly learned. Jahoda found that criminal behavior is more influence by environment, but Hutching and Mednick found that criminality was more genetic with environmental factors. Today most psychologists agree that humans may be predisposed to a certain behavior, but without the right environmental stimulators, the behavior may not develop. ...read more.