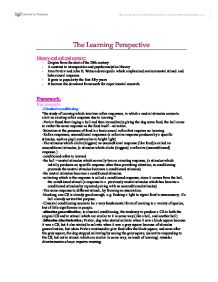 Higher Order Conditioning: a form of classical conditioning in which a previously established conditioned stimulus is used as if it were an unconditioned stimulus to create conditioning to a new stimulus. (like Pavlov and a dog who learned to salivate from the sound of a buzzer, where introduced to a black square, and then pushing the buzzer, and then the dog started to salivate) (Pavlov couldn't put a third stimulus on when it was food, but he could do that with leg withdrawal (from an electro-shock), that may tell us more about the significance of aversive stimuli like electric shock than it does about higher order conditioning as such.) (some speculate on how language learning may be closely linked to higher order conditioning.) Conditioned Emotional Response (little Albert): an emotional response such as fear which is established through classical conditioning. Conditioned Drug and Immune Responses: a dog was given a drug together with a specific sound, this drug made the dog vomit, and then the dog started vomit just by the sound. This is also usually seen in normal life. Reinforcer: A reinforcer is a stimulus which, when it follows a response, results in a change in the probability of the response recurring. Reinforcement is the process by which a reinforcer increases the probability of a response. Primary reinforcer: a stimulus whose capacity to act as a reinforcer is based on an innate biological significance, such as food, water or electric shock. ...read more.

Here are the parents the discriminative stimuli.) A stimulus which signals the contingency of reinforcement available. Non-contingent reinforcement: a situation where reinforcers sometimes occur independently of any specific response: chance forms of reinforcement. (like finding money on the pavement) Behaviour modification: the application of conditioning techniques to altering human behaviour, particularly those behaviours identified as abnormal. Contiguity: the principle that a reinforcer must occur immediately after a response in order for learning to occur. Aversive control of behaviour: negative reinforcer, the way organisms react to negative reinforcers. As noted previously, there are two ways in which aversive control is used: punishment is used to reduce the frequency of a response, whereas negative reinforcement is used to increase a response. Autonomic conditioning: (also called learned operant control of automatic responses) the conditioning of changes in autonomic (involuntary) responses (such as heart rate or blood pressure) by means of operant reinforcement. Biofeedback: a general term for application of the process of autonomic conditioning; the name refers to the fact that in humans reinforcement is based on providing an individual with information (feedback) about physiological processes (bio) which are not normally observable. Species-specific behaviour: behaviours which are characteristics of all members of a particular species; these response patterns (sometimes popularly called instincts) apply to behaviours such as mating, finding food, defence and raising offspring. Preparedness: a concept developed by Martin Seligman to describe the degree to which physiological structure influences the occurrence of behaviour. ...read more.