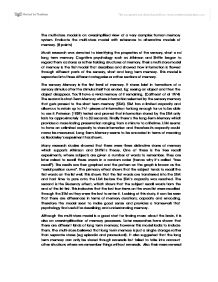 The multi-store model is an oversimplified view of a very complex human memory system. Evaluate the multi-store model with reference to alternative models of memory. (8 points) Much research was devoted to identifying the properties of the sensory, short and long term memory. Cognitive psychology such as Atkinson and Shiffin began to regard them as stores or rather holding structures of memory. Theirs multi store model of memory is the first model that describes and showed how information is flowed through different parts of the sensory, short and long term memory. This model is separated into three different categories or rather sections of memory. The sensory Memory is the first level of memory. It stores brief in formations of a sensory stimulus after the stimulus itself has ended. ...read more.

Finally there's the long-Term Memory which provides a more lasting preservation ranging from a minute to a lifetime. LTM seems to have an unlimited capacity to store information and therefore its capacity could never be measured. Long-Term Memory seems to be encoded in terms of meaning as Baddeley's experiment has shown. Many research studies showed that there were three distinctive stores of memory which supports Atkinson and Shiffin's theory. One of these is the free recall experiments, where subjects are given a number of words to remember. They are later asked to recall these words in a random order (hence why it's called "free recall"). The results are then graphed and the pattern on the graph is known as the "serial position curve". ...read more.

Therefore the model seen to make good sense and provides a framework that psychology find useful for describing and understanding memory. Although the multi-store model is a good start for finding more about the brain, it is also an oversimplification of memory processes. Later researches have shown that there are different kinds of long term memory; however this model lacks to include them. The multi-store believed that long term memory is just a single storage rather than separate stores (eg episodic and procedural). It also suggested that the long term memory can only be stored though reversals but failed to take into account other situations where we remember things without reversals. Also their mere reversal is too simple a process o account for the transfer of information from the short term memory into the long term memory. These criticisms are later dealt with by more developed models of memory. ...read more.