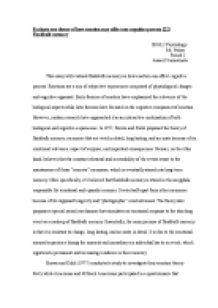 This essay will evaluate flashbulb memory on how emotion can affect cognitive process.

﻿Evaluate one theory of how emotion may affect one cognitive process [22] Flashbulb memory IB HL2 Psychology Mr. Parker Period 2 Jesseril Suriawinata This essay will evaluate flashbulb memory on how emotion can affect cognitive process. Emotions are a mix of subjective experiences comprised of physiological changes and cognitive appraisal. Early theories of emotion have emphasized the relevance of the biological aspects while later theories have focused on the cognitive component of emotion. However, modern research have approached it as an interactive combination of both biological and cognitive experiences. In 1977, Brown and Kulik proposed the theory of flashbulb memory, memories that are vivid in detail, long lasting, and accurate because of its emotional relevance, aspect of surprise, and important consequences. Neisser, on the other hand, believes that the constant rehearsal and accessibility of the events resort to the maintenance of these ?concrete? memories, which is eventually stored into long-term memory. More specifically, it?s believed that flashbulb memory is stored in the amygdala, responsible for emotional and episodic memory. It sets itself apart from other memories because of its supposed longevity and ?photographic? conclusiveness. The theory also proposes a special neural mechanism that stimulates an emotional response to the shocking event as a makeup of flashbulb memory. ...read more.

Ultimately, this debunks the original theory as even an emotionally influential, surprising, and high consequential event changes with time. Neisser and Harsch (1992) also question the existence of flashbulb memory, suggesting that it is merely the product of repetitive maintenance and recall. They asked 106 students to fill in a questionnaire and write a description of their emotional and surrounding experience upon hearing the Challenger disaster 24 hours prior. Forty-four of the same students returned after two years and completed the same event, in addition to rating their confidence of memory accuracy and whether if they had taken a quiz similar to this before. Though their confidence was 4.17, their accuracy was poor, 22 scoring 2 or less correct points. Also, the initial 21% who reported to have been informed via television increased to 45%. The results challenge the flashbulb theory because though they were confident of their answers and exposed to a ?traumatic? event, the accuracy in recall was low and lacking. The researchers deduced that memory was deteriorating in detail, regardless of shock aspects of the event. It challenges flashbulb theory because the memory of participants did not remain the same. ...read more.

Flashbulb memory is accepted as a viable phenomenon to explain why emotional memories are highly vivid. Some aspects such as emotional relevance and high importance consequences are deemed plausible in the formation of FBM, which was concluded from research sprouted by Brown and Kulik?s theory. Such that emotion-triggered hormonal changes causes people to remember events longer. However, many skeptics have reason to doubt some claims made by Brown and Kulik. Flashbulb memory is a reconstructive memory whereby emotion is a major determinant to the accuracy of the memory. Neisser has speculated that perhaps flashbulb memory is vivid because of the constant internal or external retelling of the event, which is altered through retrieval and social sharing. The elaborative recall of flashbulb memory, however, is not correlated with its accuracy. Research has also shown that regardless of confidence, the recall is no more accurate than recall on an everyday event. This suggests that the factor of vividness and accuracy are independent of one another. The inclination to errors in flashbulb memory questions the appropriateness of the term ?flashbulb? used, which implies a remarkable photographic image is inscribed in memory, though contrary to evidence presented. Flashbulb memory has been challenged by many researches on its existence. Nonetheless, it does provide a valid explanation as to why emotional impressions increases memory of the event. ...read more.