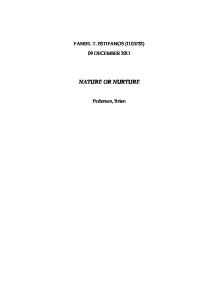 This essay will examine the various arguments that are brought up pro and against the nature and nurture debate.

FANIEL T. ESTIFANOS (1105733) 09 DECEMBER 2011 NATURE OR NURTURE Pederson, Brian Growing up people will have told that you look like your father or mother, on the other hand you may notice that you have the brown eyes from your mother and you are tall as your father; but what about your knowledge your intelligence and ability? Do you get them from your parents as well or are they innate with you and you are born with your unique ability? This essay will examine the various arguments that are brought up pro and against the nature and nurture debate. Great philosophers like Rene Descartes and John Locke argued that people acquire knowledge from the information our senses provide us with. King Solomon seems to support the nurture assumption when he suggests in the Proverbs 22:6, "Train the child in the way he should go, and when he is old he will not turn from it."People at the beginning start with simple ideas and then they combine them and can turn them into more complex ones. Psychologist J. B. Watson once said "Give me a dozen healthy infants, well-formed, and my own specified world to bring them up in and I'll guarantee to take any one at random and train him to become any type of specialist I might select - doctor, lawyer, artist, merchant-chief and, yes, even beggar-man and thief, regardless of his talents, penchants, tendencies, abilities, vocations, and race of his ancestors. ...read more.

His father was deputy Kapellmeister to the court orchestra of the Archbishop of Salzburg and taught him music at home. However it can be still argued that even though his big sister was taught music at home equally she never reached her brother's potentials. Is this the effect of inherited genes, innate ability, or is it determined by our environment and upbringing. (http://www.audiblox2000.com/dyslexia_dyslexic/dyslexia014.htm) To do well in school you have to be intelligent or smart. Again, what is meant by intelligence? Intelligence from Latin intellegentia, from and it literally means to "choose between". It can mean different things to different people, and trying to define it; is even trickier. Nonetheless people try to measure it and we are categorised; into people with higher IQ or lower IQ. IQ test where first introduced in France to separate and give special need education to the children who had lower learning capacity. Intelligence is the ability to learn quickly, comprehend and learn from past experiences. J. Piaget defines intelligence as follows: "Intelligence is assimilation to the extent that it incorporates all the given data of experience within its framework ...There can be no doubt either, that mental life is also accommodation to the environment. Assimilation can never be pure because by incorporating new elements into its earlier schemata the intelligence constantly modifies the latter in order to adjust them to new elements." ...read more.

Matthey Syed, the Times columnist and three times Common Wealth table tennis champion, believes that success is a combination of opportunities. Having an environment that encourages you to do well is a big help in shaping your ability and succeed in any field that you are inclined to do. Syed writes in his book that he came to love tennis, because his parents decided to buy him and his brother a tournament specification table. The coach at his school was a tennis fanatic who encouraged him to join a local table club. All these opportunities led him to become a successful tennis player. However practice without talent, doesn't always make you successful or outstanding. (F. Galton 2005) How we are brought up has a big impact on what we will become and achieve later in life. The environment can either bring in to light the natural abilities we have or demolish it. A child who is never praised or encouraged by the parents may turn to other things such as crime, instead of focusing on the education. There are people who are born more able than the rest of us. Some people just have higher abilities and do well in school and life and what they do is impressive despite their upbringing or the obstacles they may find in their life. They will do things that other people can never achieve no matter how much they practice or get educated. ...read more.