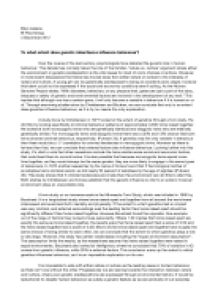 To what extent does genetic inheritance influence behavior?

﻿Ella Linskens IB Psychology 4 December 2012 To what extent does genetic inheritance influence behaviour? Over the course of the last century, psychologists have debated the genetic role in human behaviour. This debate has normally taken the role of the familiar, ?nature vs. nurture? argument where either the environment or genetic predisposition is the vital cause for most of one?s choices or actions. However, in more recent discussions the theme has moved away from either nature or nurture to the interplay of nature and nurture. A young girl can be genetically predisposed to being an excellent piano player, however this talent could not be expressed if the social and economic conditions aren?t suiting. As the Human Genome Project states, ?With disorders, behaviors, or any physical trait, genes are just a part of the story, because a variety of genetic and environmental factors are involved in the development of any trait.? This implies that although one has a certain gene, it will only become a variable in behaviour if it is turned on or of. ...read more.

It is also possible that because monozygotic twins spend more time together, as they would always be the same gender, they are more likely to engage in the same types of behaviours. In 1972 another researcher by the name of Crowe found that if the biological mother of an adoptee had a criminal record, so did nearly 50 percent of adoptees by the age of eighteen (Putwain 35). This study shows that if criminal tendencies are innate then the environment can do little to alter this. Both studies by Christiansen and Crowe establish that the genetic influence is vital to an extent, however environment plays an unavoidable role. A twin study on an immense scale is the Minnesota Twin Study, which was initiated in 1990 by Bouchard. It is a longitudinal study where twins raised apart and together from all around the world were interviewed and examined both mentally and physically. ...read more.

This conclusion sums up the extent to which genetics influences behaviour, as it is an impossible explanation on its own. It is impossible to side with either nature or nurture as the leading cause in human behaviour, as there isn?t one without the other. Progressively we are leaning towards the interaction between nature and nurture, where your genetic predispositions are expressed through environmental factors. It would be reductionist to classify human behaviour as purely a genetic feature as we are products of our everyday occurrences and situations. The talented piano player who is genetically inclined to understand music and to play fluently, cannot become a piano player without the economic capability of her parents to pay for her lessons. In the same way, someone with piano lessons cannot understand music the same way if their ears are not as programmed towards hearing and understanding tones. The studies by Christiansen Bouchard emphasize the interconnection of these factors and it is only through the examination of the cooperation of external and internal factors that we can truly gage the extent to which genetics effect our behaviour. ...read more.