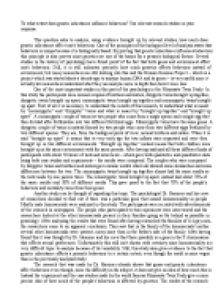 To what extent does genetic inheritance influence behaviour? Use relevant research studies in your response.

﻿To what extent does genetic inheritance influence behaviour? Use relevant research studies in your response. This question asks to analyze, using evidence brought up by relevant studies, how much does genetic inheritance affect one's behaviour. One of the principles of the biological level of analysis states that behaviour is unique because it is biologically based. By proving that genetic inheritance influences behaviour this principle is also proven since genetics are one of the basics for a person's biological factors. Several studies in the history of psychology have found proof of the fact that both genes and environment affect one's behaviour. Still, it is still unknown precisely how much genetics affects behaviour instead of environment, but many researchers are still looking into this and the ...read more.

A monozygotic couple of twins are two people who come from a single sperm and a single egg that then divided after fertilization into two different fertilized eggs. Monozygotic twins have the same genes. A dizygotic couple of twins is instead formed by two people who come from two different eggs fertilized by two different sperms. They are, from the biological point of view, normal brothers and sisters. When it is said ?brought up apart? it means that at very early age the two infants were separated and were then brought up in two different environments. ?Brought up together? instead means that both children were brought up in the same environment with the same parents. ...read more.

Another study can be thought of regarding this topic. The psychologist Dr. Hammer and his crew of researchers decided to find out if there was a particular gene that caused homosexuality in people. Mostly male homosexuals were analyzed in this study. The participants were recruited with advertisements of the research in newspapers. The people who participated to this experiment were interviewed and the researchers looked at the other homosexuals present in their families going as far behind as possible in genealogy. After analyzing the results that were found after having researched the families of 114 gay men, the researchers came to an apparent conclusion. They saw that in the family of the homosexuals' mother several other homosexuals were present, many more than in the father's side of the family. After having found this it was thought by Dr. ...read more.