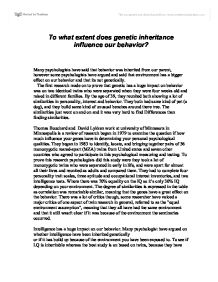 To what extent does genetic inheritance influence our behavior?

To what extent does genetic inheritance influence our behavior? Many psychologists have said that behavior was inherited from our parent, however some psychologists have argued and said that environment has a bigger effect on our behavior and that its not genetically. The first research made on to prove that genetic has a huge impact on behavior was on two identical twins who were separated when they were four weeks old and raised in different families. By the age of 39, they reunited both showing a lot of similarities in personality, interest and behavior. They both had same kind of pet (a dog), and they build same kind of unusual benches around there tree. The similarities just went on and on and it was very hard to find Differences than finding similarities. ...read more.

Where there was 70% equality on the IQ so it's only 30% IQ depending on your environment. The degree of similarities is expressed in the table as correlation was remarkable similar, meaning that the genes have a great effect on the behavior. There was a lot of critics though, some researcher have voiced a major critics of one aspect of twin research in general, referred to as the "equal environment assumption", meaning that they all have had the same environment and that it still wasn't clear if it was because of the environment the seminaries occurred. Intelligence has a huge impact on our behavior. Many psychologist have argued on whether intelligence have been inherited genetically or if it has build up because of the environment you have been exposed to. ...read more.

We really cant be sure and say that genetic inheritance influence our behavior or say that it's actually not something that is inherited but that it is build up from our environment that we are exposed to. It's not because of nature nor nurture, but because of both of them has a huge impact on each other. Genetic influence always rely on environment, for example some of the genes are used on occasion, some are always used and some are never used at all because the environment they are exposed to never recall them, And even if you have been brought up in a rich environment and you haven't inherited genetics with high I.Q, you still can't be as smart because they go together. ...read more.