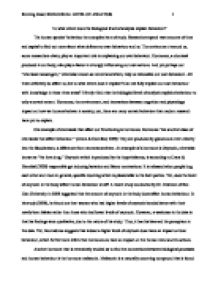 To what extent does the biological level of analysis explain behaviour?

To what extent does the biological level of analysis explain behaviour? The human species' behaviour is a complex item of study. Researchers spend vast amounts of time and capital to find out more about what defines our own behaviour and us. The environment around us, some researchers claim, play an important role in explaining our own behaviour. Hormones, a chemical produced in our body, also play a factor in strongly influencing our own actions. And yet perhaps our "chemical messengers," otherwise known as neurotransmitters, help us rationalize our own behaviour. All three definitely do affect us, but to what extent does it explain? Can we fully explain our own behaviour with knowledge in these three areas? I firmly think that the biological level of analysis explains behaviour to only a certain extent. Hormones, the environment, and interactions between cognition and physiology impact on how we humans behave in society; yet, there are many certain behaviors that modern research have yet to explain. One example of chemicals that affect our functioning is hormones. Hormones "are another class of chemicals that affect behaviour." (Crane & Hannibal, 2009) They are produced by glands and enter directly into the bloodstream, a difference from neurotransmitters. An example of a hormone is Oxytocin, otherwise known as "the love drug." ...read more.

Her hypothesis was that they would have bigger posterior hippocampi than control subjects. (as cited in Milner, 1999). The reason she thought so was because the role of the "hippocampus was to facilitate spatial memory in the form of navigation." (Milner, 1999) The research was done by machinery such as Voxel-based morphometry that would examine an MRI scan for the hippocampus size of the control subjects and the taxi drivers. The results showed that indeed the hippocampus size of the taxi drivers were larger than the control subjects; hippocampus size in general. This matches with the idea that their hippocampus size should be bigger due to the vast amount of knowledge they must possess for the taxi driver exam. In general, the data here suggests that indeed our environment does affect our brain processes and hence our behaviour. Another factor from the environment is our interactions with other people, consciously and unconsciously as well. A study done by Iacoboni (as cited in Crane & Hannibal, 2009) produced data suggesting that indeed our behaviour is impacted by the feelings and in general, the environment around us. His study involved subjects imitating the face on the screen and then merely looking at the screen the second time around, all while undergoing an MRI (Crane & Hannibal, 2009). ...read more.

(Cloe, 2011) Another area where dopamine works is the pleasure "centres" of the body. As an extreme example of how dopamine explain behaviour, Olds and Milner's study in 1956 showed that rats were literally "addicted" to dopamine to the extent that they valued it over water and other basic needs and as a result died. (as cited in Bozarth, 1994) Both examples of neurotransmitters again show that indeed to a certain degree neurotransmitters can explain human behaviour. Yet, again there is an extent and limit to how much neurotransmitters can explain. Oversimplification of seemingly complex human behaviours to a simple solution such as serotonin without being fully proved remains a problem. Human behaviour is an extremely difficult area of research. Even with today's technology, researchers are still not able to solve the intricacies of the how we make our own actions. Yet, we can explain many happenings in the mind with external and internal factors, like the surrounding environment, hormones, and neurotransmitters. The overarching problem remains as to what extent can they really explain our mind? In fact, some researchers say, can they really explain anything? Or perhaps the answer is very simple; the happenings in the mind do occur as a result of those factors. Maybe the factors do somewhat explain the answer holistically, but yet we have yet to delve into the tiny intricate details of the mind. Or perhaps...we will never do find out what really is the right answer to our own actions and thoughts. ...read more.