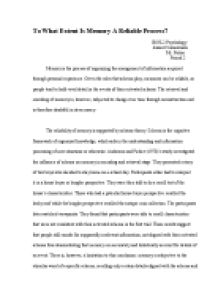 To What Extent Is Memory A Reliable Process?

﻿To What Extent Is Memory A Reliable Process? IB HL2 Psychology Jesseril Suriawinata Mr. Parker Period 2 Memory is the process of organizing the arrangement of information acquired through personal experience. Given the roles that schema play, memories can be reliable, as people tend to hold vivid detail in the events of their activated schema. The retrieval and encoding of memory is, however, subjected to change over time through reconstruction and is therefore doubtful in its accuracy. The reliability of memory is supported by schema theory. Schema is the cognitive framework of organized knowledge, which aids in the understanding and information processing of new situations or otherwise. Anderson and Pichert (1978)?s study investigated the influence of schema on memory in encoding and retrieval stage. They presented a story of two boys who decided to stay home on a school day. Participants either had to interpret it in a house buyer or burglar perspective. They were then told to do a recall test of the house?s characteristics. Those who had a potential house buyer perspective recalled the leaky roof while the burglar perspective recalled the antique coin collection. The participants later switched viewpoints. They found that participants were able to recall characteristics that were not consistent with their activated schema in the first trial. These results suggest that people still encode for supposedly irrelevant information, not aligned with their activated schema thus demonstrating that memory can accurately and holistically account for details of an event. ...read more.

This reconstruction occurs according to mood/attitude and activated schema when prompted. It can be easily influenced by external factors and therefore show memory?s unreliability and inaccuracy. Loftus and Palmer (1974) established the reconstructive hypothesis with their famous study of automobile destruction. In the first experiment, 45 participants, divided into groups of nine, were shown a short-film of a traffic accident. Following the video, the participants were asked the question, ?about how fast were the cars going when they ____ each other?? They manipulated the independent variable by changing the word in the blank to: smashed, collided, bumped, hit, or contacted. Participants given the ?smashed? stimulus responded with an average estimated speed (mph) of 40.8 while those given ?contacted?, the least suggesting a violent connotation, responded with 31.8 (mph). Their findings suggest that the way the question was worded, in other words, the language influences the participant?s interpretation. The second experiment was identical to the first. However, this time 150 participants were tested and divided into three conditions (smashed, hit, or control). The same participants returned within a week and were asked if they saw any broken glass from the former car accident video they watched earlier. Again, 16 out of 50 from the ?smashed? group responded with a ?yes?. The ratio of yes or no increased with the ?hit? and ?control? group. Regarding their results, Loftus and Palmer formulated an explanation to explain how it coheres with eye witness testimony: two sources (watching the video and the prompt question) ...read more.

The additional finding that very high arousal participants recalled significantly accurate details challenges the precedence of memory reliability. Age has also been greatly researched. Memory of children has been suggested to be highly vulnerable to inaccurate recall from fear of contradicting authoritative figures. Through Cohen & Faulkner?s (1989) study, they found that memory of elder people was less complete, vulnerable to misleading information, and inaccurate in comparison to younger participants. This, aligned with common judgment, ultimately implies that reliability of memory deteriorates with age. The weaknesses of these factors, however, are its laboratory-based outcomes from which their conclusions are derived from. Essentially, the problem with anxiety is the over simplicity of Yerkes-Dodson?s (1983) inverted-U hypothesis. Whereas studies on age suggest that they have been testing with stimuli that appeals more to younger audience. Memory is not characterized as objectively accurate; it is reliable in remembering certain aspects of a situation when given the appropriate schema. People recall details that are compatible with whatever schema, the cognition framework of organized knowledge, is activated. However, the perception of the event is entirely coded; the original memory stays intact for retrieval of different activated schema. Even so, memory can still be faulty through substitution and wrong placement of schema-related objects. Memory, nonetheless, is limited; it is open to changes and reconstruction. The Eye Witness Theory proposes that memory is often misconstrued to complement leading questions and easily altered by external influences such as anxiety and age. Therefore we should take precautions in memory?s reliability, as we cannot be completely dependent on its accuracy. ...read more.