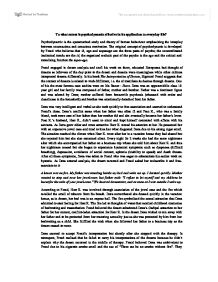 To what extent is psychodynamic effective in its application to everyday life?

To what extent is psychodynamic effective in its application to everyday life? Psychodynamic is the systematized study and theory of human behaviour emphasizing the interplay between unconscious and conscious motivation. The original concept of psychodynamic is developed by Freud who believes that id, ego and super-ego are the three parts of psyche; the uncoordinated instinctual trends are the id, the organised realistic part of the psyche is the ego and the critical and moralising function the super-ego. Freud engaged in dream analysis and until his work on them, educated Europeans had thought of dreams as leftovers of the day prior to the dream and dreams were meaningless while other cultures interpreted dreams differently. In his book The Interpretation of Dream, Sigmund Freud suggests that the content of dreams is related to wish-fulfilment, i.e. the id manifests its desires through dreams. One of his the most famous case studies were on Ida Bauer - Dora. Dora was an upper-middle class 18 year girl and her family was composed of father, mother and brother. Father was a dominant figure and was adored by Dora; mother suffered from housewife psychosis (obsessed with order and cleanliness in the household) and brother was emotionally detached from his father. Dora was very intelligent and verbal so she took quickly to free association and seemed to understand Freud's ideas. ...read more.

Kanzer). The main scope was that the patient's symptoms didn't disappear during analysis; they occur only afterward and were postponed by transference. After Dora's case we have an impression that the duty of the woman is to embrace sexual submission. The analytical situation models this relationship of mastery and submission. What is transferred are not so much the sexual desires of the female patient onto the male analyst as the power-politics of the male analyst to control his female patient. Importance of the use of the dreams in therapy has been tested throughout the years by some empirical studies. Hobson's and Solms's first major empirical difference concerns the neurophysiologic origins of dreaming. According to Hobson, the lower levels of serotonin and nor epinephrine during REM, when combined with high levels of acetylcholine, make dreaming state very different from waking, providing it with several distinctive characteristics, such as bizarreness. They assume that the content of everyday dreams reflects the dreamer's waking states and concerns. Research findings have revealed that the occurrence of recurrent dreams, nightmares and unpleasant everyday dreams is related to one's psychological well-being. For instance, it has been found that understanding a disturbing persistent dream can reduce its occurrence and its associated distress (Webb & Fagan, 1993). In 2001 Hill did the empirical research that has shown that dreams' pleasant or unpleasant content has a vital function in gaining from dream interpretation. ...read more.

For many decades, The Psychoanalytic Study of the Child-an annual volume published originally by Yale University Press - has presented many such studies as well as theoretical essays by the world's foremost analytic clinicians. These writings have often been exceptional in their observations and insights but they do not equal experimental and controlled findings. The kind of clinicians who are attracted to such an in-depth, detailed, rich, complicated form of treatment are less likely to be interested and skilled in research. Second, the methods of psychoanalytic play therapy (e.g., interpretations, empathic listening) cannot be standardised the way that a behavioural intervention or cognitive-behavioural strategy can be. Third, many of the goals and experiences of psychoanalytic therapy - ego growth, self-awareness, and comfort within one's own skin - again are not that easy to define and assess quantitatively. Fourth, psychoanalytic therapy is as much art as science. On the surface, three child therapists can say and do everything identically and yet have very different effects on the child. In conclusion, psychoanalytically-informed play therapy can be a powerful form of treatment. But it can sometimes be lengthy, costly, hard, and painful for both children and their parents. For the child therapist, learning and mastering psychoanalytic play therapy can be demanding, both intellectually and emotionally. It requires conviction and personal involvement and yet it's very subjective and cannot be generalised. ...read more.