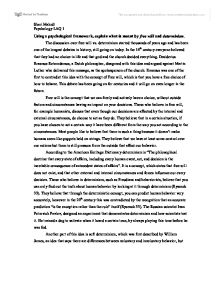 Using a psychological framework, explain what is meant by free will and determinism.

Using a psychological framework, explain what is meant by free will and determinism. The discussion over free will vs. determinism started thousands of years ago and has been one of the longest debates in history, still going on today. In the 16th century everyone believed that they had no choice in life and that god and the church decided everything. Desiderius Erasmus Roterodamus, a Dutch philosopher, disagreed with this idea and argued against Martin Luther who delivered this message, as the spokesperson of the church. Erasmus was one of the first to contradict this idea with the concept of Free will, which is that you have a free choice of how to behave. This debate has been going on for centuries and it will go on even longer in the future. Free will is the concept that we can freely and actively have a choice, without outside factors and circumstances having an impact on your decisions. Those who believe in free will, for example humanists, discuss that even though our decisions are affected by the internal and external circumstances, do choose to act as they do. ...read more.

It defines the differences as behavior impacted highly by other circumstances and behavior influenced only slightly. Free will and determinism are two concepts on completely opposite ends of the spectrum, making them opposite. However, both ideas lead to the better understanding of behavior, where one claims to accurately predict behavior while the other believes it is up the human's will. Some might say that free will can never let psychologists understand behavior, since it is completely random. Determinists are convinced you cannot predict behavior using the concept of free will since you cannot test it. You can easily make a prediction but there is no accurate way to justify it. If you were to say committing suicide was free will, determinists might say that this might have been caused by depression or mental issues, or any other sorts of pressure from environmental, political, physical and sociological factors. Most psychologists agree that your history, your experiences and your surroundings have impacted your behavior. Your personality, which is an internal factor, has been formed and shaped through your past experiences. ...read more.

You can never be sure which one it is and so it becomes very difficult for doctors or police investigators, for example, to make these decisions, upon which the criminal might go to prison. A strength in determinism is that you can make predictions and test them to a certain extent. You can use the experimental method to make a prediction that a certain factor causes a certain behavior, and then test it. However this might sound easier than it is because we only have very little knowledge of these external and internal factors (Eysenck 34) and therefore it is almost impossible to accurately predict human behavior with this method. Altogether, free will and determinism are two very different ideas, with several limitations and strengths to each. Free will is, commonly, what people would like to believe, but because it doesn't make so much sense the second idea seems to present us with more predictable theories, and testability. However these don't always prove accurate either, which leaves the sub concepts like soft determinism which includes the ideas of both. The debate will always come up with new arguments to defeat the other, and we wont see it end in the near future. Shari Mahrdt Psychology LAQ 1 ...read more.