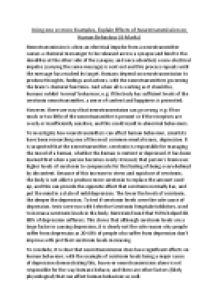 Using one or more Examples, Explain Effects of Neurotransmission on Human Behaviour

To investigate how neurotransmitters can affect human behaviour, scientists have been researching one of the most common mental issues, depression. It is suspected that the neurotransmitter, serotonin is responsible for managing the mood of a human, whether the human is content or depressed. It has been learned that when a person becomes overly stressed, that person?s brain uses higher levels of serotonin to compensate for this feeling of being overwhelmed by discontent. Because of this increase in stress and rapid use of serotonin, the body is not able to produce more serotonin to replace the amount used ...read more.

Bernstein found that SSRIs helped 60-80% of depression sufferers. This shows that although serotonin levels are a large factor in causing depression, it is clearly not the sole reason why people suffer from depression as 20-40% of people who suffer from depression don?t improve with just their serotonin levels increasing. To conclude, it is clear that neurotransmission does have significant effects on human behaviour, with the example of serotonin levels being a major cause of depression demonstrating this, however neurotransmission alone is not responsible for the way humans behave, and there are other factors (likely physiological) that can affect human behaviour as well. ...read more.