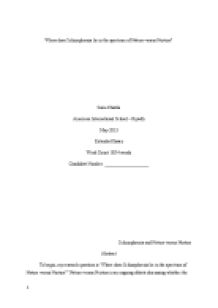 Where does Schizophrenia Lie in the Spectrum of Nature vs Nurture?

As explained above, delusions are hallucinations are positive symptoms that are associated with a schizophrenic?s daily life. Additionally, they occur in the brain and one?s thoughts. In addition to that, in the Active Phase, distortions in thinking and disturbances in behavior and feeling are also considered positive symptoms. Distortions in thinking are associated with one?s thoughts and ability to think straight, and disturbances in behavior and feeling include a person having odd behavior and not feeling right. The third phase, which comes after the Active Phase is known as the Residual Phase. It is quite similar to the Prodromal Phase in terms of symptoms. Schizophrenics usually feel listless, lethargic and they experience trouble concentrating. A Case of Schizophrenia To begin, there are many different cases of schizophrenia. For example, my uncle, Ghassan Chatila is being diagnosed with Paranoid Schizophrenia. Before he reached the age of 23, Ghassan was ?different? (Chatila). At a young age, he had a few qualities that differentiated him from others. He was isolated, self conscious, lacked confidence, and he was an over-thinker. He didn?t seem like a normal boy but it didn?t worry his family because he was still young, and he was a smart kid. At the age of 23, he moved to Germany to complete his doctorate degree in organic chemistry. ?He had very few friends, he started acting weird, and his way of thinking suddenly changed,? Ghassan?s brother, Marwan Chatila uttered. ?Schizophrenia triggered? (Chatila). When Schizophrenia triggered, Ghassan?s state started deteriorating. He started getting paranoid about people spying and following him, he started focusing on silly things and he imagined things beyond possibility. He began to experience some schizophrenic episodes without knowing it. He started to have distortions in his thought, and delusions that seemed very unrealistic. Although he was a successful student and a man with a lot of intelligence, as soon as schizophrenia took over, he was not able to think straight. ...read more.

Because of these cures, schizophrenics no longer have to be hospitalized, and their thoughts are less likely to cause another relapse. Conclusion In conclusion, after doing all this research it was clear to me that there was no specific cause for schizophrenia, however there are many different things that may contribute to its development. The ongoing debate about nature versus nurture (genes versus environment) both play a role in the development of this disorder. Although there is no solid proof, or scientific experiments that prove so, there has been a lot of research done on this. Genetic contributions could include having first or second-degree relatives, which could increase one?s risk of developing Schizophrenia. There are several environmental contributions many of which include the exposure to viruses, stressful environmental conditions, malnutrition in the womb, and early parent loss or separation. However, schizophrenia is a disease that is produced differently in every human being. Each person has 46 chromosomes, and each of their genes are located on 23 chromosomes. Each person inherits two copies of each gene, from each parent. Several genes could be associated with a risk of schizophrenia depending on whether each parent has a relative who has schizophrenia. However, this does not guarantee that the child will get schizophrenia. Although one may have a relative that has this disorder, this does not directly suggest that they will have it. And although one may not have a relative that has this disorder, this does not mean they cannot it. Relatives may be carriers of this disorder and that may lead to the ?schizophrenia gene? being passed on to different generations. Schizophrenia is a life long disease that I believe is caused by a combination of both genetic and environmental factors. In the spectrum of Nature versus Nurture, schizophrenia lies somewhere in between Nature and Nurture. One may have schizophrenia in their genes, however it is not until they are in a certain environment that it triggers. It entirely depends on the person and how their genes and the environment work together to produce this disorder. ...read more.