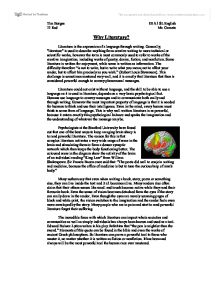 Why Literature? Literature is the expression of a language through writing. Generally, "literature" is used to describe anything from creative writing to more technical or scientific works, however the term is most commonly used to refer to works of the creative imagination, including works of poetry, drama, fiction, and nonfiction. Some literature is written for enjoyment, while some is written as information. The difficulty therefore "is not to write, but to write what you mean; not to affect your reader, but to affect him precisely as you wish." (Robert Louis Stevenson). This challenge is sometimes mastered very well, and it is exactly that literature that then is considered powerful enough to convey phenomenal messages. ...read more.

Psychologists at the Stanford University have found out that one of the best ways to keep an aging brain sharp is to read powerful literature. The reason for this is that complex literature activates a very wide range of areas in the brain and stimulating them to form a denser synaptic network which then keeps the body functioning better. The coloured areas in the diagram show the activity of the brain of an individual reading "King Lear" from William Shakespeare. Sir Francis Bacon once said that: "The poets did well to conjoin writing and medicine, because the office of medicine is but to tune the curious harp of man's body." ...read more.

Many people who are in pain and start to read powerful literature forget their suffering. The incredible force with which literature can impact whole societies and communities as well as simply individuals has always been known and used as a tool. Edward Bulwer-Lytton writes in his play Relichieu that "the pen is mightier than the sword." Elements of this quote can be found in the bible and even the works of ancient Greek philosophers. So literature can prove a powerful tool to those who master it, no matter whether it is written as fiction or nonfiction. It has been and always will be the most powerful tool the human race ever mastered. ?? ?? ?? ?? Tim Borgas IB A1 SL English 11 Red Mr. Geraets ...read more.