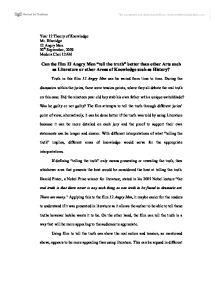 Year 12 Theory of Knowledge Mr. Etheridge 12 Angry Men 30th September, 2009 Medora Choi 12AM Can the film 12 Angry Men "tell the truth" better than other Arts such as Literature or other Areas of Knowledge such as History? Truth in this film 12 Angry Men can be varied from time to time. During the discussion within the juries, there were tension points, where they all debate the real truth on this case. Did the nineteen year old boy stab his own father with a unique switchblade? ...read more.

If defining "telling the truth" only means presenting or revealing the truth, then whichever area that presents the best would be considered the best at telling the truth. Harold Pinter, a Nobel Prize winner for literature, stated in his 2005 Nobel lecture "the real truth is that there never is any such thing as one truth to be found in dramatic art. There are many." Applying this to the film 12 Angry Men, it maybe easier for the readers to understand if it was presented in literature as it allows the author to be able to tell these truths however he/she wants it to be. ...read more.

This can be argued in different situations but applying to this case, the choice of using film to tell the truth ultimately becomes the better alternative. This film was about discovering the truth and distinguishing what "telling the truth" exactly means. It presents truth better because using conversations can be more effective than the having the audience to use literature to digest the truth. Since the efficiency impacts on the way of telling truth, literature can not control the pace of the "telling the truth" even though it can bring greater detail, and thus the film 12 Angry Men can tell the truth better than other Arts and in such case, Literature. ...read more.