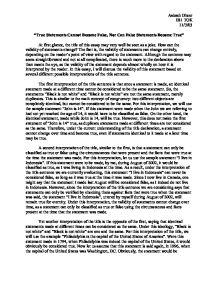 "True Statements Cannot Become False, Nor Can False Statements Become True" At first glance, the title of this essay may very well be seen as a joke. How can the validity of statements change? The fact is, the validity of statements can change entirely, depending on the reader's point of view with regard to the statement. Although the sentence may seem straightforward and not at all complicated, there is much more to the declaration above than meets the eye, as the validity of the statement depends almost wholly on how it is interpreted by the reader. In this essay, I will discuss the validity of this statement based on several different possible interpretations of the title sentence. The first interpretation of the title sentence is that once a statement is made, an identical statement made at a different time cannot be considered to be the same statement. So, the statements "Black is not white" and "Black is not white" are not the same statement, merely duplicates. ...read more.

However, since the interpretation of the title sentence we are considering says that statements can only be verified by checking them against facts that were true when the statement was said, the statement "I live in Indonesia", uttered by myself during August of 2002, will remain true for eternity. Under this interpretation, the validity of statements cannot change over time, as a statement can only be classified as true or false using the circumstances and facts present at the time that the statement was made. Yet another interpretation of the title is the opposite of the first, saying that identical statements made at different times can be considered as the same. Under this ideology, "Black is not white" and "Black is not white" are one and the same. For this interpretation of the title, we will use the example "Philadelphia is the capital of the United States of America". Were this statement made in 1794, when Philadelphia was indeed the capital of the United States, it would obviously be considered true. ...read more.