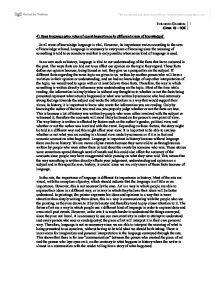 4) Does language play roles of equal importance in different areas of knowledge?

4) Does language play roles of equal importance in different areas of knowledge?

In an area such as history, language is vital to our understanding of the facts that have occurred in the past. The ways facts are laid out to us affect our opinion on the topic they regard. These facts define our opinion because, being biased or not, they give us a perspective on the subject. If different facts regarding the same topic are given to us, written by another person who will have a variation in their opinion or understanding, and we had no knowledge of any other interpretation of the topic, we would tend to agree with or at least believe these facts. Therefore, the way in which something is written directly influences your understanding on the topic. Most of the time while reading, the information is simply taken in without any thought as to whether or not the facts being presented represent what actually happened or what was written by someone who had extremely strong feelings towards the subject and wrote the information in a way that would support their views. In history, it is important to know who wrote the information you are reading. Only by knowing the author of the text you read can you properly judge whether or not the facts are true. This is because a lot of history was written by people who were either involved with the subject or witnessed it; therefore the accounts will most likely be based on the person’s own point of view. The way history is written is affected by factors such as the author’s gender, political view and whether or not the author was involved with the event. Depending on these factors, the story might be told in a different way and this might affect your view. It is important to be able to analyse whether or not what you are reading is a biased view made by someone or if it is in fact and accurate account on what happened. Language is important in history because without language there can be no history. We are aware of past events because they were told to us through stories written by people who were either there or told about the events by someone who was. These stories were sometimes spread through word of mouth and this could also affect the accuracy of the accounts since people may have exaggerated while passing on what they were told. This means that the way something is written directly affects your judgement, understanding and opinion on a subject and in this specific area, history, is crucial since we are only aware of these facts because of language.

In the arts, the importance of language is different its importance in history. Most of the arts are visual, with the exception of poetry, which should indicate that the language is of little or no importance. However, this is not necessarily the case. Art is a way in which people are able to express their ideas in a different way, or in way in which they believe their ideas will be better understood. In paintings, the painter expresses his ideas and opinions in a way that is more attractive than simply writing them down, this in a way is communicating with the people who see the painting, as they are drawn to it by its beauty and therefore tend to pay closer attention to it. The forms of art are a way in which people use a different kind of language in order to express ideas and even retell past events. However, in the arts it is much harder to understand the things conveyed, since they are not literal. It is necessary to use our own creativity in order to attempt to understand and every person who sees or reads (poetry) the piece of art will interpret it in their own personal way. Therefore, language is not as necessary since we are able to interpret the meaning of what is being presented to us ourselves, without having to be told what we should be thinking. There is more room for imagination and personal interpretation in the language conveyed through the arts. This shows that there is far less “communication” between the person who created the piece of art and the person who lays eyes on it, on the contrary to what happens in history where the writer is almost in a conversation with the reader telling him a story of what happened.

Another area of knowledge is mathematics. This area is different to the previous two in such as way that we are not told a story or presented with something that we must create our own opinion on, but we are presented with facts supported by concrete evidence. Mathematics is not open to interpretation since it provides us with formulas that prove certain things to be true or not. There is no space for us to create our own opinion on anything because we are already fed all the facts possible. The form of language used here is different to in the other two areas. In mathematics words are hardly used and the ways of communicating are predominantly through numbers and sometimes diagrams. Although there is little or no room for us to make our own interpretations on mathematics, there is still some communication in the subject. The formulas and numbers presented to us as ways of proving certain things. It is impossible for someone’s ideas and discoveries to be seen by another person without the use of language. The only way in which these ideas and discoveries could move on through time is if somehow another person either read about these in notes or a journal made by the creator, or was told by the creator himself directly. Independent of whether this other person found out about this through speech or writing, language was used.

Ethics is another area of knowledge. Although ethics are largely a matter of common sense, language is necessary. If there were no language within ethics, it would not be possible for the common knowledge regarding what is right and wrong to be passed on through people. It is true that initially someone ‘sensed’ that something that was being done was not morally right, but it took language for this person to convey his ideas to people all around. Language was a simple transition of one person’s ideas to another person, but after this there is not much more involved. After the ideas of what is right and wrong are known, it is up to each and every individual to base their actions on what they have learnt. This sometimes is not particularly the case, since some people might not agree with these ideas and create their own. After this, the whole cycle will start again with the new ideas being conveyed. Therefore, language plays a similar part to the one it does in the arts, as whether or not a person agrees with the ideas are largely left to personal interpretation.

From these examples above it is possible to see that language does in fact play different roles in different areas of knowledge. However, it was also possible to see that language is in fact necessary and present in all the areas stated above. The language used always provides room for interpretation, except for mathematics where we are simply told concrete facts that have been broken down to their minimum. The information we are fed affects the way with think about something, therefore the way something is laid out is very important as people’s opinions will be based on that. Although language is necessary, it can sometimes cause misunderstandings depending what they are about and who they are from. This is why language is a delicate issue as a simply difference can change something completely.