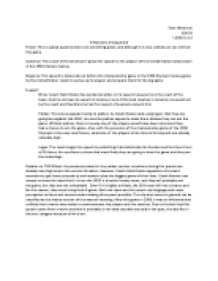 4 ways of argument-analysis of the Miracle on Ice speech.

﻿Tyler Westover 2/8/12 Lackovic p.2 4 Elements of Argument Thesis: This is a great opportunity to do something great, and although it is very unlikely we can still win this game. Audience: The coach of the American?s gives this speech to the players of the United States hockey team in the 1980 Olympic Games. Exigence: This speech is delivered just before the championship game in the 1980 Olympic hockey game by the United States? coach to pump up his players and prepare them for the big game. Support: Ethos: Coach Herb Brooks has accidental ethos in his speech because he is the coach of the team. ...read more.

Without pathos, there is no way any of the players would have been convinced they had a chance to win the game. Also, with the presence of the championship game of the 1980 Olympics is the very near future, emotions of the players at the time of this speech are already naturally high. Logos: The coach begins his speech by admitting that statistically the Russians will be them 9 out of 10 times. He uses facts to show that most likely they are going to lose this game and they are the underdogs. ...read more.

Even if it is highly unlikely, the USA team still has a chance and for this reason, they must bring their A-game. Both the team and the coach use language and sense perception to listen and communicate making this speech possible. This clip and movie in general can be classified as the history section of the ways of knowing. After this game in 1980, it was so influential and unlikely that a movie was made to commemorate the players and the coaches. Due to the fact that this speech came from a movie and that it probably is not what actually was said in the past, the also fits in the arts category because a film is art. ...read more.