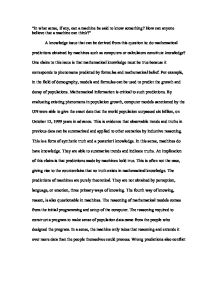 In what sense, if any, can a machine be said to know something? How can anyone believe that a machine can think?

"In what sense, if any, can a machine be said to know something? How can anyone believe that a machine can think?" A knowledge issue that can be derived from this question is: do mathematical predictions obtained by machines such as computers or calculators constitute knowledge? One claim to this issue is that mathematical knowledge must be true because it corresponds to phenomena predicted by formulas and mathematical belief. For example, in the field of demography, models and formulas can be used to predict the growth and decay of populations. Mathematical information is critical to such predictions. By evaluating existing phenomena in population growth, computer models sanctioned by the UN were able to give the exact date that the world population surpassed six billion, on October 12, 1999 years in advance. ...read more.

Wrong predictions also conflict with Plato's definition of truth which holds that truth must be eternal. Once proven wrong, the truth is no longer eternal. Source: "World at Six Billion." UN Department of Economic and Social Affairs. United Nations, n.d. Web. 19 Jan 2011. <http://www.un.org/esa/population/publications/sixbillion/sixbillio n.htm#top>. "Does making a knowledge claim carry any particular obligation or responsibility for the knower?" A knowledge issue that can be derived from this is: how important is the sharing of individual knowledge to the advancement of human knowledge as a whole? One claim that can be made is that without the communication of knowledge, people will continue to hold false beliefs and no advancement can be made. For example, the ancient Greek view of the brain, originally held by Aristotle, maintained that the heart was the center of intellect and the brain was simply responsible for the cooling of blood heated by the heart. ...read more.

An implication of this claim is that only one person will attain a certain bit of knowledge. This is not necessarily true. A counterclaim is that more than one person can know the same bit of knowledge without any communication between the two. Someone other than Galen might have conducted experiments and found the true function of the brain. However, if that other scientist had not communicated that knowledge to the community of knowers, most other thinkers would not know the truth. Thus, if knowledge is not common and spread amongst the community, no advancement can be made as a whole. If only a select few people know the truth, there are still others who do not and continue to perpetuate false beliefs, and the community as a whole cannot make further advancement. Source: F., Mark, Barry W., and Michael A. Neuroscience: Exploring the Brain. 3. Lippincott Williams & Wilkins, 2007. 5-7. Print. ...read more.