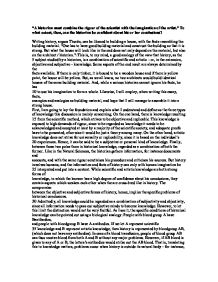 A historian must combine the rigour of the scientist with the imagination of the artist. To

"A historian must combine the rigour of the scientist with the imagination of the artist." To what extent, then, can the historian be confident about his or her conclusions? Writing history, argues Thur�n, can be likened to building a house, with the facts resembling the building material. "One has to have good building material and construct the building so that it is strong. But what the house will look like in the end does not only depend on the material, but also on the architect / historian."1 This is, to my mind, a good analogy of the view that history, as the 5 subject studied by a historian, is a combination of scientific and artistic - or, in the extension, objective and subjective - knowledge. Some aspects of the end result are always determined by the facts available. If there is only timber, it is bound to be a wooden house and if there is yellow paint, the house will be yellow. But, as we all know, no two architects would build identical houses of the same building material. And, while a serious historian cannot ignore his facts, he has 10 to use his imagination to form a whole. ...read more.

After all, all knowledge is based upon observation of the 45 world, and in a larger perspective ultimately treat the same questions. Now, with the walls raised, we can go on to the roofing. Flaubert once commented that 'writing history was like drinking an ocean and pissing a cupful'2 - a comment that seems to hold some truth. The condensation from an endless amount of information into something useful, the essence, must involve a selection. The problem is thus that history has to be the historian's choice, based on 50 his or her interpretations. Consequently, doubts can be raised as to whether the selection and interpretation processes reflect the object of study, reality, satisfactorily. Asking a Palestinian Arab historian and an Israeli Jewish historian about the history of Palestine/Israel would perhaps result in slightly different answers. Furthermore, some historians even argue that history is created the moment it is written. This is a view that acknowledges the subjective influences in history, and 55 emphasises the artist's influence on the historian's work. The view of others, that the historian's task is to uncover the traces of history through documents, accounts and other evidence, seemingly has the scientific rigour as the dominant influence on the historian. ...read more.

Admittedly, the more information, the closer is the gap between different interpretations, but the point should still be clear. Information and historical facts always have to be interpreted and put in a context, and in this process insecurities do exist. So which conclusions can be drawn from the discussion above? To say that a historian can never be confident about his or her conclusions would mean that the subject of history is reduced to no 95 more than an advanced form of guesswork, and that would be, despite the problems of history, an exaggeration. On the other hand, saying that the historian can be fully confident, combining the forces of the scientist and the artist would, to my mind, be to disregard the implications of the problem of objectivity and reliability of history itself. The hardly exciting answer is, hence, that the answer is somewhere in the middle. When all criteria are met, adequate facts have been 100 presented, critically interpreted and put in a proper context, the historian can to a large extent be confident about his or her conclusions. However, due to the nature of the subject, a historian can never, be fully confident. The architect, returning to the opening analogy, can only hope that his house will sustain the tests to which it is going to be exposed. (1571 words) ...read more.