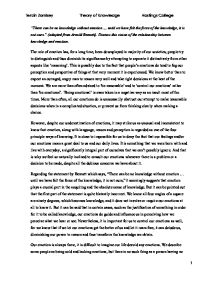 There can be no knowledge without emotion until we have felt the force of the knowledge, it is not ours. (adapted from Arnold Bennett). Discuss this vision of the relationship between knowledge and emotion.

"There can be no knowledge without emotion ... until we have felt the force of the knowledge, it is not ours." (adapted from Arnold Bennett). Discuss this vision of the relationship between knowledge and emotion. The role of emotion has, for a long time, been downplayed in majority of our societies; people try to distinguish and thus diminish its significance by attempting to separate it distinctively from other aspects like 'reasoning'. This is possibly due to the fact that people's emotions do tend to fog our perception and perspective of things at that very moment it is experienced. We know better than to expect an outraged, angry man to reason very well and take right decisions at the heat of the moment. We are more than often advised to 'be reasonable' and to 'control our emotions' rather than 'be emotional'. 'Being emotional' is even taken in a negative way as an insult most of the times. More than often, all our emotions do is unnecssarily obstruct our attempt to make reasonable decisions when in a complicated situation, or prevent us from thinking clearly when making a choice. ...read more.

This study tells us how one patient's emotions largely determine his ability to make able decisions, and thus the same could apply to more of us as well. It could mean that this sort of impulse comes to us so naturally that we completely take it for granted until something happens and we lose, like Damasio's patient. According to Arnold Bennett's statement, he suggests that our emotions control reason, our obtaining of knowledge, or that it fuels reason. It is true that emotions serve as an incentive to pursuit knowledge in an individual. It acts as some sort of drive for us to acquire certain knowledge, so that we long to know and find truth. With passion, knowledge becomes more achievable and desirable. Take for instance, Sir Thomas Edison; his invention has literally brought light to our world, but he failed countless number of times while carrying on his experiment. Yet, he never succumbed to failure and that eventually paid off and the world saw the greatest breakthrough of the century. But what could have been the reason behind Edison's strong determination, his unfaltering resolution on producing what he set out to produce? ...read more.

And thus, as is very evident, emotions give rise to biasness and favoritism which intrude in our obtaining of knowledge. But again, if we talk about the Mathematics, we know solving equations involve no such emotions, unless one is working on a monumental theory or maybe simply finding a problem difficult to solve. Ultimately, in studying emotions, even though we tend to and are encouraged to think of it and reason as two separate aspects, in reality we will find that they are so closely related to one another that it is almost impossible to differentiate them as two distinct things. Hence, most believe that reason and emotion work together as one, although at times one may take over more control. Emotion adds and strengthens ones attainment of knowledge, and has an indestructible relationship with it. And despite the many controversial arguments brought up, like the Stoics' idea of attaining self-control and pure knowledge by freeing one's self from all destructive emotions, we know our ability to reason would most likely be obsolete. Thus, however much we are discouraged to involve our emotions in our decisions and act of reasoning, the undeniable fact is that it an innate, integral part of ourselves and therefore, will always either be there to help or to intrude. Tenzin Zomkey Theory of Knowledge Hastings College 1 ...read more.