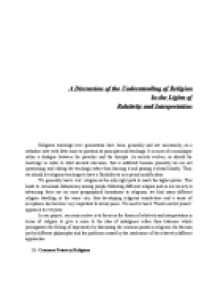 Transfer-Encoding: chunked ﻿A Discussion of the Understanding of Religion In the Lights of Relativity and Interpretation Religious teachings over generations have been, generally and not necessarily, on a orthodox note with little room to question its principles and teachings. It is more of a monologue rather a dialogue between the preacher and the disciple. As society evolves, so should the teachings in order to hold societal relevance, this is inhibited because presently we are not questioning and editing the teachings rather than learning it and passing it ahead blindly. Thus, we should let religious teachings to have a flexibility to accept and modify ideas. We generally teach ?our? religion as the only right path to reach the higher power. This leads to communal disharmony among people following different religion and as our society is advancing there are no more geographical boundaries to religions, we find many different religion dwelling in the same city, thus developing religious sensitivities and a sense of acceptance has become very important to social peace. We need to teach ?Preach and let preach? approach to everyone. In our project, our main motive is to focus on the theory of relativity and interpretation in terms of religion to give a room to the idea of indulgence rather than tolerance which presupposes the feeling of superiority by discussing ...read more.

* Sacred Texts Sacred texts or scriptures are an important part of many religions. Many of these writings are thought to have come directly from a god or goddess, usually as some kind of miraculous revelation. Others are known to be compositions of an original founder of the religion, or early leaders or prophets, but are now considered to be divinely-inspired. The sacred writings of Hinduism include the Vedas and the Upanishads. The Hebrew Bible, the sacred text of Judaism, was created over a period of at least eight centuries, but no new books have been added in two thousand years. Most Christians also consider the Hebrew Bible to be a sacred text, but have added some additional books to it in the form of the gospels and other books of the New Testament. Followers of Islam believe that their sacred book, the Quran (or Koran), are the words of Allah given to Mohammed through the voice of the angel Gabriel. Adherents of most religions consider it very important to preserve their sacred writings exactly in their original form. * Afterlife In many belief systems, a person's soul (or consciousness) continues to survive after the physical body dies. This continued existence is usually thought to take place in a spiritual realm, or possibly a different universe or dimension. ...read more.

Hence, the society which is made up of the individual itself loses its serenity no matter how religion tries to persist it. * Social Cynicism If the individual does not have the understanding of relativity and indulgence towards it, he/she creates a suspicion towards the individuals embracing different interpretations, practices or looks. This suspicion leads to thoughts such as: ?He is having beard/kada/dhoti, he must be _____(the name of an interpretation). If he is a _____and if the terrorist I saw on TV yesterday claimed to be _____ too. Then he must be a terrorist and I should stay away from him.? This problem causes phobias; thus, it provokes social cynicism * Inferiority/Superiority Complex If a particular approach is overrated and the other possibilities are blindly left behind, it creates a delusion of grossly exaggerated feeling of being superior in the individual. Similarly; if an individual lives in an environment in which its ideas are not taken into consideration or even objected, it creates a delusion of inferiority complex in the individual. Many of individuals with inferiority syndrome grow up being shy, and this problem can lead to being hateful towards the ?superior? inside. Both of the complexes create considerable damages in the individual?s life in long run if not in a short period. ...read more.