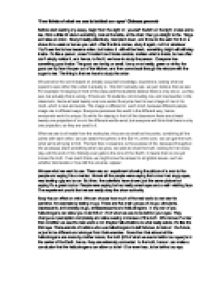 'Two thirds of what we see is behind our eyes' Chinese proverb Before start reading my essay, begin from the sight on yourself. Switch on the light, make some tea, think a little bit about something, look at the table, at the chair, then go straight to the fridge and take an onion. Study it really attentively, trample it down, and throw to the wall. Put it on a shave for a week or two as you wish. After the time comes, study it again, cut it or whatever. You'll see that is has became rotten, but inside, it still will be fresh, something bright will still stay inside. It's like a person, doesn't matter how it looks outside, matters what is inside, but we often don't simply notice it, and hence, to find it, we have to study the person. Everyone has something good inside. The good can be big or small, funny or not really, green or white, the good can fly from the pan out of the kitchen, and then come back through the window with the sugar to tea. The thing is that we have to study the onion. ...read more.

Almost all the people were saying that a man had angry eyes, was looking ugly and so on. But then, the scientists have shown just the same picture but saying it's a great doctor. People were saying he had really smart eyes and a well-wishing face. The experiment proofs that we are easily obey the sham authority. Body has an effect on mind. We can choose how much of the real world do we want to perceive, for example by taking drugs. There are five main groups of drugs: stimulants, depressants, anti-anxiety drugs, antidepressants and hallucinogens. In my own of you hallucinogens can allow you to let 5/6 or 1/3 of what we see to be behind your eyes. They change our perception completely and allow seeing more less of the truth. Who knows if under that condition we see the real world a not. Maybe hallucinations is what really exists, it's like the third eye. There are lots of nations who use hallucinogens to tell fortunes, to look at the future, or just to be different and stronger from their enemies. More than that almost all the hallucinogens are made by mother nature, the truth (0/3 of what we see is behind our eyes) ...read more.

In my own point of view, Deja vu is when 5/6 of what we see is behind our eyes. The brain swaps present with the past, and we perceive much less information then we could, because we see the sample. We see the world through mostly our own perspective. It is impossible to remove our own opinions and past knowledge from what we observe and think, but we can still manage to see past ourselves when we desire to learn something. 'Two thirds of what we see is behind our eyes' I understand as rule, that our perception is so limited, but imagination is so boundless. Look, around ( do not never forget the 2/3 of what you see right now is behind your eyes). Everything you see around you was at first someone's thought, someone's imagination. At the same time people are being such creates as they can make up 2/3 of what we see without any difficulties, but they cannot simply see correctly what is around us. We are at the same time cheated and awarded. A man is an amazing creature, but there is an infinity to develop him. ?? ?? ?? ?? ...read more.