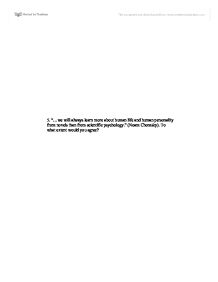 we will always learn more about human life and human personality from novels than from scientific psychology. (Noam Chomsky). To what extent would you agree?

5. "...we will always learn more about human life and human personality from novels than from scientific psychology." (Noam Chomsky). To what extent would you agree? Number of words: 1,472 Human life and personality still remain a mystery for science and for humankind as a whole. Our behaviour seems to be irrational and unpredictable at times, and even if the natural sciences and mathematics have been able to uncover many of the physical mysteries in our world, the human "soul" and "mind" still continue to raise serious questions. The spiritual part of our nature is apparently a wonder, because it cannot be examined in a test tube or under a microscope. Human behaviour can take unexpected turns and make us wonder if we are aware of what the mind is capable to come up with. As for the question in the title, I believe both scientific psychology and novels contribute to the development of a better understanding of human life and personality, though in pretty different ways. What is useful in novels is that they offer an individual approach to a character and people, therefore, can relate to them and learn more about their own personality. ...read more.

But does this mean that the psychologists' observations are just vague reflection of human nature? Similarly, Freud compared human spirit to an iceberg, where the tip above the water stands for consciousness, and the large region beneath the surface represents the unconscious part of the mind. This implies that only a tiny part of human personality is shown on behaviour and the rest remains hidden. Psychoanalysis, which is believed to be founded by Freud, is based on the theory that individuals are often unaware of the factors determining their emotional experiences and behaviour. These unconscious factors may lead to unhappiness, neurotic personality traits, difficulties in relationships, or disturbances in mood and self-esteem. By tracing the origins of the traumas, which are causing those psychological problems, Freud believed that one could reclaim their normal lives and gain emotional stability. But such ideas about the role of the subconscious are often present also in works of literature. Many novelists have tried to portray the characters' hidden experiences and unrealised desires, which may be considered a form of psychoanalysis. But novels, poems and literary works in general present their ideas mostly by means of individual examples the readers are capable of understanding and interpreting. ...read more.

On the other hand, psychoanalysis, similarly to novels, is oriented towards the individual and not so much towards "general cases", which shows that psychology and literature can be very close. This demonstrates that one cannot treat scientific psychology and literature as two completely separate fields and, therefore, state that the one is completely and always better than the other. There will always be great psychologists, writers, poets and other kinds of people, who would manage to present convincing insights to human personality and behaviour. However, I highly doubt that this mystery will ever be fully revealed and understood by humankind. After all, it is namely the exploration of the new questions humanity raises that makes the world unique and life worth living. 1 "The Fairfield Review: Quotes and Sources", http://www.fairfieldreview.org/fairfield/tfrquotes.nsf/ 2 Freud, Sigmund. The Ego and the Id. The Hogarth Press Ltd. London, 1949 3 Kraus, Karl. Half-Truths and One-and-a-Half Truths. University of Chicago Press, 1990 4 Golding, William. The Lord of the Flies. Faber and Faber, London, 1954 5 Stevenson, Robert Louis. The Strange Case of Dr. Jekyll and Mr. Hyde. Longmans, London, 1886 6 "Imaginary Magnitude", imagitude.blogspot.com/2007/10/poet-must-be-psychologist-but-secret.htm ?? ?? ?? ?? 2 ...read more.