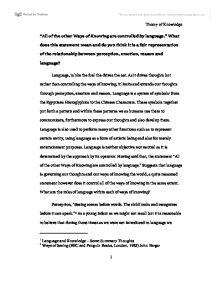 All of the other Ways of Knowing are controlled by language. What does this statement mean and do you think it is a fair representation of the relationship between perception, emotion, reason and language?

"All of the other Ways of Knowing are controlled by language." What does this statement mean and do you think it is a fair representation of the relationship between perception, emotion, reason and language? Language, is like the fuel the drives the car. As it drives thoughts but rather than controlling the ways of knowing, it limits and extends our thoughts through perception, emotion and reason. Language is a system of symbols1 from the Egyptians Hieroglyphics to the Chinese Characters. These symbols together put forth a pattern and within these patterns we as humans use them to communicate, furthermore to express our thoughts and also develop them. Language is also used to perform many other functions such as to represent certain entity, using language as a form of artistic being and also for merely entertainment purposes. Language is neither objective nor neutral as it is determined by the approach by its operator. Having said that, the statement "All of the other Ways of Knowing are controlled by language." Suggests that language is governing our thoughts and our ways of knowing the world, a quite reasoned statement however does it control all of the ways of knowing in the same extent. ...read more.

about to be kicked an emphasis on the temporal, rather than the spatial, relationship between the principal objects in the picture.3 This was because as it happens to be the Indonesians had a language with a verb system that there was no variation between past, present and future. Changing their ways of which they perceived the pictures, just by the subtle difference in grammatical structure it had influenced how they had perceived the pictures during the experiment. Emotions are thoughts with feelings as we apply emotion to a particular thought it becomes objective. Language is used to describe our many different emotions. Happy, sad, love, anger, desire, envy, guilt and disgust these are few of the many emotions we go through on a daily bases. However other than these words how do we describe a certain emotion. Emotions are hard to describe language limits our feelings as we are probably able to tell others the feelings that we are going through only if we know what they are. Language rather than controls emotion limits emotions. ...read more.

According to the Weltanschauung hypothesis which states that thought would be impossible without language in other words that we do not have a single thought that is not linked to a word. Without language there will be no means of communication. Language is the reason to which we as a species are ruling this planet. Language not only controls the ways of knowing, it limits and extends them. In perception, simple grammatical structure can affect what people perceive. Emotions are language driven thought with feelings attached. Reasoning cannot be done without language. All the ways of knowing involve language to a certain extent. "Language shapes the way we think, and determines what we can think about."4 Language is limited and imprecise however we try our best to convey or thoughts using language. Therefore the statement "All of the ways of knowing are controlled by language" expresses part of the relationship between the ways of knowing. http://72.14.235.132/search?q=cache:F4YZlS87y1sJ:202.116.28.6/kejian/soft/??????/??/?????/SapWhorH.doc+Weltanschauung+hypothesis&cd=2&hl=en&ct=clnk&client=safari http://en.wikipedia.org/wiki/Reason http://en.wikipedia.org/wiki/James-Lange_theory http://en.wikipedia.org/wiki/Emotion#James-Lange_theory http://www.babycentre.co.uk/baby/newborn/babycrying/ http://www.linguistlist.org/issues/15/15-163.html http://www.philosophyonline.co.uk/tok/perception1.htm http://thinkexist.com/quotations/language/ http://www.angelfire.com/ultra/themeaningoflife/images/language.html 1 Language and Knowledge - Some Summary Thoughts 2 Ways of Seeing (BBC and Penguin Books, London, 1983) John Berger 3 http://www.linguistlist.org/issues/15/15-163.html 4 Benjamin Lee Whorf Theory of Knowledge I ...read more.