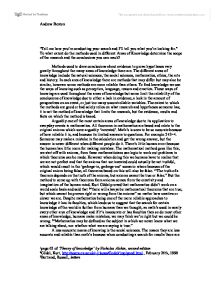 Tell me how youre conducting your search and Ill tell you what youre looking for.&quot; To what extent do the methods used in different Areas of Knowledge determine the scope of the research and the conclusions you can reach?

"Tell me how you're conducting your search and I'll tell you what you're looking for." To what extent do the methods used in different Areas of Knowledge determine the scope of the research and the conclusions you can reach? Methods used to draw conclusions about evidence to prove hypotheses vary greatly throughout the many areas of knowledge there are. The different areas of knowledge include the natural sciences, the social sciences, mathematics, ethics, the arts and history. In each area of knowledge there are methods that may differ but may also be similar, however some methods are more reliable than others. To find knowledge we use the ways of knowing such as perception, language, reason and emotion. These ways of knowing are used throughout the areas of knowledge but some limit the reliability of the conclusions of knowledge due to either a lack in evidence, a lack in the amount of perspectives on an event, or just too many uncontrollable variables. The extent to which the methods are good or bad solely relies on what research and hypotheses someone has; it is not the method of knowledge that limits the research, but the evidence, results and facts on which the method is based. ...read more.

Based on the nature of the question questionnaires can manipulate people into choosing what they want to choose. By the difference in nature of the question, one changes the way in which he conducts his search by manipulating people to believe what he believes so that he finds what he's 'looking for'. Another example of an unreliable method of knowledge to collect results for social science is the 'observational effect'. This is where the humans being watched act differently to try and make other people feel that they are better than they really are. The limits of the research are numerical answers. In social sciences it is very hard to come up with values that apply to everyone in the world. For example if we were to compare the amount of medals won in the Olympics we would find that most medals were won by countries with big populations, however the percentage of their population that won a medal was a lot smaller than other countries. In social sciences patterns of human behavior are looked for, however only the correlation of a few results can be shown despite their being many other variables that cannot be kept constant. ...read more.

Primary sources are used by historians to try and see a convergence with another resource. People can deliberately manipulate these sources by writing them for their own benefit and so the methods in which historians obtain facts are selective and therefore cannot be used to find certain knowledge. In conclusion, the different methods of obtaining conclusions differ widely throughout the various areas of knowledge. In mathematics the method used is based on axioms which could actually be false themselves. In the social sciences humans are studied which creates fallacies because humans are so unpredictable, and even if we did understand how every human works, I think that it would be dehumanizing as no individual would have its individuality. In art the artist conveys his message through beauty and the method in which viewers understand it is through emotion. However by using emotion to understand a 'hard-to-read' text may evoke emotions that are not intended by the author; resulting in a fallacy in the truth of the knowledge of the art. History is based on primary resources that may be biased, and to find knowledge of the past in order to use it in the present historians must view different perspectives. This makes it selective towards more likely occurrences which may be bias. ...read more.