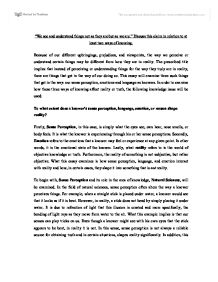 "We see and understand things not as they are but as we are." Discuss this claim in relation to at least two ways of knowing. Because of our different upbringings, prejudices, and viewpoints, the way we perceive or understand certain things may be different from how they are in reality. The prescribed title implies that instead of perceiving or understanding things for the way they truly are in reality, there are things that get in the way of our doing so. This essay will examine three such things that get in the way: our sense perception, emotions and language as knowers. In order to examine how these three ways of knowing affect reality or truth, the following knowledge issue will be used: To what extent does a knower's sense perception, language, emotion, or reason shape reality? Firstly, Sense Perception, in this case, is simply what the eyes see, ears hear, nose smells, or body feels. It is what the knower is experiencing through his or her sense perceptions. Secondly, Emotion refers to the emotions that a knower may feel or experience at any given point. In other words, it is the emotional state of the knower. Lastly, what reality refers to is the world of objective knowledge or truth. Furthermore, the reality of something is not subjective, but rather objective. ...read more.

The film was met with wide public support and even an anonymous author at that time claimed that the film provides "the best treatment of this parasitic race" (The Eternal Jew: The Film of a 2000-Year Rat Migration). In addition, posters claiming Jewish people to be "Warmongers" and "War Prolongers" were also created in order to fuel further anti-Semitism and were met with support (Politics Unspun - The Ghost of Bigotry Past). Considering this, persuasive language was used to not only turn German civilians against the Jewish people but to make them seem evil. This example illustrates how persuasive language, in propaganda, can manipulate people into thinking something is true when in fact it is not. Once again, this is an example of seeing things as "we are" and not as they are in reality. Emotion, as well, often alters reality from what it truly is. For example, the aftermath of the attacks on the World Trade Center in September 11, 2001 provide evidence for emotion shaping reality. Ever since it was revealed that the attacks were carried out by Al-Qaeda, the Islamic extremist group, there has been a change in the way many Americans and other people around the world perceive the people of Islam. Case in point, the term "islamaphobia" became very popular in the United States after the attacks (Terrorism and Political Violence: Islamaphobia in America?). ...read more.

Considering this, I know not to believe every single thing Jung says about Mao and Mao's China. Through reason, I know that perhaps certain aspects of Mao's China are not as bad as they are described by the Jung's writing. Perhaps due to emotional appeal and passionate language, this is a situation where I was initially inclined to believe what the author claims to be true. However, by using reason, I was able to prevent emotions and persuasive language from shaping reality. In this sense, reason provided me with undistorted reality and allowed me to see things for the way they truly are. In conclusion, I personally believe that ways of knowing such as emotion, sense perception or language shape our reality greatly. Whether it is our own senses that betray us, the media that influences us, or emotions that affect our reasoning, reality is altered everyday to a certain extent. However, we as humans have come to a point in our existence where we cannot afford to let these things get in the way of truth or objective knowledge. We've become intelligent enough to understand this idea over the decades and decades of the mistakes we have made and knowledge we have gained. That is why, we use reason and logic to put aside our emotions, our sense perceptions, or the thousands of languages of this world, and try to see things for the way they are and not as we are. ...read more.