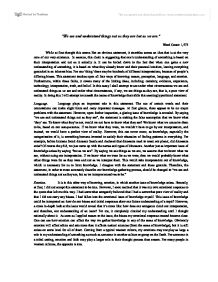 "We see and understand things not as they are but as we are." Word Count: 1,573 While at first thought this seems like an obvious statement, it stumbles across an idea that is at the very core of our very existence. In essence, this claim is suggesting that one's understanding of something is based on their interpretation and not as it actually is. It can be boiled down to the fact that when one gains a new understanding of something, it is based on what they already know and their personal intuition, leaving everything grounded in an inherent bias. For one 'thing' there may be hundreds of different interpretations, because of people's differing biases. This statement touches upon all four ways of knowing: reason, perception, language, and emotion. Furthermore, within these fields, it covers many of the linking ideas, including: certainty, evidence, experience, technology, interpretation, truth, and belief. In this essay I shall attempt to see under what circumstances we see and understand things as we are and under what circumstances, if any, we see things as they are, that is, a pure view of reality. In doing this I will attempt to unearth the issues of knowledge that riddle this seemingly profound statement. ...read more.

Obviously emotion will affect ethics and arts more than it affects natural sciences (from the areas of knowledge), but it is still exists on some level for all of them. Coming from a typical western culture, my emotions may not play as large a role in my understanding of something as much as someone in another culture or group on the Earth. For someone in a tribal setting, emotion and faith may play a larger role in their thought process than reason. For many people in western cultures, the opposite is true. Reason. This leads to another way of knowing, reason. When using reason to form our understanding of something, we use our logic to deduce from evidence what the truth is, the truth being "a justified true belief, not based on a lie." The important part to take from this is our belief. If one believes something to be true, and they have justified it, it is true for them. However, it may not be true for others because their logic may differ from another's logic. This gives us many different interpretations of one thing. This raises a very important issue of issue of knowledge: how can we be sure our biases are not causing our reason to be flawed? ...read more.

It appears to be impossible to form knowledge or understanding without having human interpretation. This is because knowledge, especially the classification of it, is something humans have invented to cope with their surroundings. These interpretations carry inherent biases. These biases, whether they are in language, emotion, reason, or perception, do exist, albeit in different scopes. These biases also differ from person to person for many reasons such as their culture, beliefs, and their world view. Essentially, we understand things as we interpret them, based on our biases and interpretation, and not how they actually are. Therefore, the claim that "we see and understand things, not as they are, but as we are", is accurate. However, due to the language-based issue of knowledge pertaining to the fact that we don't know who we are, we only have an interpretation of who we are, the claim would be more accurately put as "we see and understand things not as they are, but as we interpret ourselves to be." This can be viewed as somewhat disheartening, realizing that even in our advanced society, with all its technology and innovation, we may never be able to understand something as it actually is, rather than just how we interpret it. ...read more.