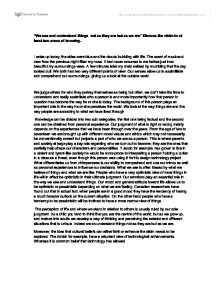 "We see and understand things not as they are but as we are" Discuss the claim to at least two areas of knowing. I woke up today; the skies were blue and the clouds bubbling with life. The scent of musk and dew from the previous night filled my nose. It had never occurred to me before just how beautiful my surroundings were. A few minutes later my maid walked by mumbling that the day looked dull. We both had two very different points of view. Our senses allow us to assimililate and comprehend our surroundings, giving us a look at the outside world. We judge others for who they portray themselves as being but often, we don't take the time to understand and really assimilate who a person is and more importantly how that person in question has become the way he or she is today. ...read more.

What differentiates us from chimpanzees is our ability to comprehend and use our minds as well as personal experiences to influence our decisions. What we see is often biased by what we believe of things and what we are like. People who have a very optimistic view of most things in life will in effect be optimistic in their ultimate judgment. Our emotions play an essential role in the way we see and understand things. Our mood and general attitude toward life allows us to be optimistic or pessimistic depending on what we are feeling. Canadian researchers have found out that in actual fact, when people are in a good mood they have the tendency of having a much broader outlook on the current situation. On the other hand people who have a tendency to be pessimistic will be inclined to have a more narrow view of things. ...read more.

Two areas of knowledge that closely relate to this claim are history and mathematics. History is an area of knowledge that deals a lot with subjectivity, as the accuracy and accounts of global events throughout the centuries are never the same according to different communities; historical opinions on war differ or happenings differ. For example, different countries have different interpretations of when World War Two officially started. Most historians agree that the commonly accepted date is either September 1st or 3rd of 1939. However, according to the Germans, the date is 1st September 1939 because that is when they invaded Poland. On July the 7th 1939 The Japanese invaded China and n the 3rd September of the same year France and Britain declared war on Germany. This goes to show how in History we ultimately see and understand things not as they are but as we are, seeing as every community has a different version of world events. Children living in China will see and understand things differently to children who are form Germany. (Discuss about divergence of opinion in wars/ give examples) ...read more.