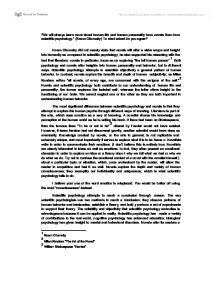 We will always learn more about human life and human personality from novels than from scientific psychology. (Noam Chomsky) To what extent do you agree?

"We will always learn more about human life and human personality from novels than from scientific psychology." (Noam Chomsky) To what extent do you agree? Noam Chomsky did not merely state that novels will offer a wider scope and insight into humanity as compared to scientific psychology, he also supported his reasoning with the fact that literature, novels in particular, focuses on exploring "the full human person"1. Both psychology and novels offer insights into human personality and behavior, but in different ways. Scientific psychology attempts to establish objectively a general pattern of human behavior. In contrast, novels explore the breadth and depth of human subjectivity; as Milan Kundera writes "all novels, of every age, are concerned with the enigma of the self."2 Novels and scientific psychology both contribute to our understanding of human life and personality; the former explores the isolated self, whereas the latter offers insight to the functioning of our brain. We cannot neglect one or the other as they are both important in understanding human behavior. The most significant difference between scientific psychology and novels is that they attempt to explore the human psyche through different ways of knowing. Literature is part of the arts, which uses emotion as a way of knowing. A novelist shares his knowledge and perception of the human world as he is writing his book. ...read more.

By looking at the way in which the novelist and the scientific psychologist treat the human emotion of fear, we can begin to understand the differences between the two. Fear is one of the most commonly felt emotions in the human world. Along with love, anger, and sadness, fear can be explained through the eyes of a scientific psychologist as a chemical and hormonal reaction, and in the eyes of a novelist as another significant human emotion to be explored. To a neurologist, the feeling of fear occurs when certain hormones are secreted by adrenal glands. Adrenaline is then synthesized and released into the bloodstream, along with noradrenalin. These two hormones are released in situations of fear or stress, causing other physical reactions. Adrenaline increases the body's heart rate, increases sweat production, dilates the pupils and widens the lung's bronchioles. To the psychologist, fear causes similar reactions in every human being. We all release the same hormone, adrenaline, which stimulates the same physical responses. In the eyes of a novelist, fear is different for everyone. This uniqueness we could call the subjective phenomenon of individual self-hood. Different people experience fear from different things, what triggers fear in all of us varies. Some fear darkness, others fear pain and death. Novelists have presented the different emotions that occur in the face of fear through their works. ...read more.

Although both scientific psychology and literature have provided insight and knowledge to human life and personality, both encompass slight flaws in their attempt to define human behavior. Scientific psychology generalizes: it concludes that results obtained from their population sample are applicable to the rest of the human population. It does not take into consideration the subjectivity and inconsistency that defines human nature. Human behavior is immeasurable, it is imprecise. Scientific psychologists only study the patterns of behavior that can be studied, such as conditioning, but not all behavior can be studied scientifically. Some of our actions are compelled by forces unknown to us. Novels explore the inconsistencies of human behavior. Why does Anna Karenina kill herself? Why does Hamlet feign madness? These actions, both in the novels and in real life, cannot be explained because humans will always encompass a particular uncertainty. Scientific psychology studies the measurable behavior of humans and the chemical reactions that occur in our body. Novels study the wide scope of human emotion and behavior, the perplexing nature of man. If we only studied psychology, we would not know the inconsistencies of mankind. If we only studied literature, we would not know why most of the times humans respond and behave in similar ways to certain situations. We need to take both of them into consideration. 1 Noam Chomsky 2 Milan Kundera "The Art of the Novel" 3 William Shakespeare "Hamlet" 4 258-260 John Fowles "The Collector" 5 2-4 Jos� Saragamo "Blindness" ?? ?? ?? ?? ...read more.