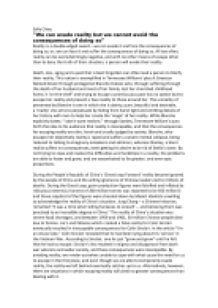 A Streetcar named Desire - We can evade reality but we cannot avoid the consequences of doing so. Discuss

﻿Sally Chieu ?We can evade reality but we cannot avoid the consequences of doing so? Reality is a double-edged sword ? we can evade it and face the consequences of doing so, or, we can face it and suffer the consequences of doing so. All too often, reality can be overwhelmingly negative, and with no other means of escape other than to deny the truth of their situation, a person will evade their reality. Death, loss, aging and a past that is best forgotten can often lead a person to falsify their reality. This notion is exemplified in Tennessee Williams' play A Streetcar Named Desire through protagonist Blanche Dubois who, through suffering through the death of her husband and most of her family, lost her cherished childhood home, it ?on-the-shelf? and trying to escape a promiscuous past has no option but to escape her reality and present a faux reality to those around her. The unreality of presented by Blanche is one in which she is dainty, pure, beautiful and desirable, a ?reality? she aims to perpetuate by hiding from harsh light and omitting details of her history with men to help her create the ?magic? of her reality. ...read more.

and those sceptical of the figures were shouted down by Maoist idealists unwilling to acknowledge the reality of China?s situation. Jung Chang ? a Chinese historian, remarked ?It was a time when telling fantasies to oneself ... and believing them was practised to an incredible degree in China.? The reality of China?s situation was severe food shortages, and between 1959 and 1961, 30 million Chinese people died due to famine. Lie?s and fallacies which created a false reality for Colin Sinclair eventually resulted in inescapable consequences for Colin Sinclair. In the article ?I?m an Anzac fake,? Colin Sinclair revealed that he had been lying about his ?service? in the Vietnam War. According to Sinclair, one lie just ?grew and grew? until he felt that he had to escape. Sinclair?s lies resulted in stigma and disapproval from both war veterans and wider society, and these consequences were inescapable. By avoiding reality, we render ourselves unable to cope with what cause the need for us to escape in the first place, and even though we are able to temporarily evade reality, the reality we left behind eventually catches up to us. ...read more.

Stella ignores the fact that Stanley raped her sister Blanche so that she could continue living with him for the welfare of herself and her baby. Had Stella not ignored reality, her dependence on Stanley, ?Stanley doesn?t give me a regular allowance, he likes to pay bills himself?, and lack of options available for women during a post World War II world would have meant Stella?s social demise. Both Griffin and Stella were forced to evade reality to avoid the consequences of reality- and neither Griffin nor Stella suffered any physical loss as a result of their evasion of reality. Realities is often overwhelming, but by escaping reality people leave themselves with no option but to escape deeper into their own fallacies, and eventually suffer exacerbated consequences because of delaying reality. Alternatively there are those situation in which an escape from reality is the seemingly better option, but reality is inescapable, and the consequences of avoiding your reality may, at any time, catch up to you. Rather than evading reality, confront reality ? the consequences may be immediate, but the inevitable consequences one must face are easier to deal with sooner rather than later. ...read more.