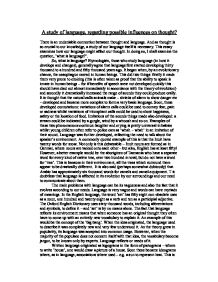 A study of language, regarding possible influences on thought?

A study of language, regarding possible influences on thought? There is an undeniable connection between thought and language. And as thought is so crucial to our knowledge, a study of our language itself is necessary. This essay examines how our language might affect our thought. In doing so, I shall examine the question, 'what is language?'. So, what is language? Etymologists, those who study language (in how it develops and changes), generally agree that language first started developing thirty thousand to a hundred and fifty thousand years ago. It began when, by an evolutionary chance, the oesophagus moved in human beings. This did two things: firstly it made them very prone to choking (this is often taken as proof that the ability to speak is innate in human beings - for if benefits of speech were not developed quickly this should have died out almost immediately in accordance with the theory of evolution) and secondly it dramatically increased the range of sounds they could produce orally. ...read more.

Language is very vague and words can have myriads of meanings. In the English language, the word 'set' has fifty eight non-obsolete uses as a noun, one hundred and twenty eight as a verb and ten as a participial adjective. The Oxford English Dictionary uses sixty thousand words, including abbreviations and symbols, to define it - and 'set' is by no means alone. The fact that language reflects its environment means that when someone has an original thought they often have to come up with an entirely new vocabulary to explain it. An example of this would be the concept of the 'big bang'. When the idea originated, the language used to describe it was completely new and very few understood it. As the theory grew in popularity, its language was accepted into common usage. However, when the majority of the populace does not concern itself with that idea, the vocabulary become jargon, to be known only by experts. Language reflects or needs of it. ...read more.

Look, they say, at when we are 'lost for words' or the words are on the 'tip of our tongue': we know what we're thinking but can't say it. Another example would be that we can often imagine in our heads as an image something - for example, the beginning of the universe - but can't describe it. This theory states language is created by thought, although language may later by used as a means through which to think. Many etymologists would agree with this theory as it complies with their theory on how language develops: you see something, you think about it and then you develop language to convey these thoughts and to clarify them. So, our language is shaped by the world around us, and our thoughts are shaped by our language. So our thoughts are influenced, not just out of practicality, but empirically by our surroundings. For if we are not familiar with a concept or object or person then we are unlikely to have the language to describe it: and if we don't have the language then we are unlikely to be able to think about something properly, even if we wished to. ...read more.