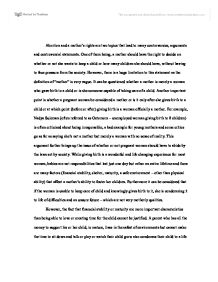 Abortion and a mothers rights.

Abortion and a mother's rights are two topics that lead to many controversies, arguments and controversial statements. One of them being, a mother should have the right to decide on whether or not she wants to keep a child or how many children she should have, without having to face pressure from the society. However, there is a huge limitation to this statement as the definition of "mother" is very vague. It can be questioned whether a mother is merely a woman who gave birth to a child or is she someone capable of taking care of a child. Another important point is whether a pregnant woman be considered a mother or is it only after she gives birth to a child or at which point (before or after) giving birth is a woman officially a mother. ...read more.

However, the fact that financial stability or maturity are more important characteristics than being able to love or creating time for the child cannot be justified. A parent who has all the money to support his or her child, is mature, lives in the safest of environments but cannot make the time to sit down and talk or play or watch their child grow also condemns their child to a life of loneliness and is essentials, a life no better than the child who's mother might not have all the resources to raise him. An example of this can be seen in the movie " I am Sam", which despite being a bit unrealistic, is able to give viewers an insight to a very true and happening world of parents who have no time. ...read more.

A teenage pregnancy for example - can she really be considered a mom or even ready to become a mother. Love and care can are essential but they can only take a woman so far in life with her children, as everything else is just as important. Nowadays, when this issue is being brought out to such extends, many more woman - young or old believe they have the right to decision which leads to many things, more teenage pregnancy or young woman who think a child is the right choice but change their mind, virtually ruining their life as a child is not something that can be thrown out of the window. On the other end of the scale many older woman (50's, 60's etc) are giving birth, which leads to just as many complications as they might die, leaving their young kids to a motherless life. ...read more.