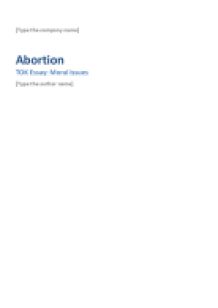 Abortion: Ethical or Not?

﻿[Type the company name] Abortion TOK Essay: Moral Issues [Type the author name] ________________ To what extent does reasoning influence the morality of abortion? ?Abortion? and ?morality? are words that have been the center of many debates for the past decades. Abortion, for the purpose of this essay, is the voluntary act of the mother to create a means of end for the feotus inside her. Many people have argued over the justification of the actions of a woman who is willing to terminate her pregnancy. Many would say that abortion is morally wrong but others also perceive that it can be morally justifiable. The problem in deciding the morality of abortion does not lie on finding an accepted principle, but in determining the relevant factors that affects an individual?s perception of abortion. Many people in society conclude that abortion is always wrong and therefore is unacceptable. One of the main premises of this argument is that the feotus within the womb of the mother is a human being and has the rights to life. ...read more.

Arguments in favor of abortion give a kind of symmetry to the most common assertion on abortion. They often deduce that abortion can be morally justifiable and therefore it is morally permissible. Specifically, people in favor of abortion counter those who are against it by claiming that a feotus is not a human being. If one believes that only an actual human has the right to life then one must accept that the feotus does not have that right. Since a feotus does not have a claim on the right to life then it is permissible to take that life from the feotus. Another basis that people use to defend abortion is the right of the pregnant woman. Many would say that if a woman is unwilling to carry a child in her womb and if abortion is morally wrong, the woman would be forced to use her body as a place where the feotus could develop. Prohibiting a woman from a choice over pregnancy and reproducing defies the liberty of choice in a free, democratic area and thus, the woman has the moral rights to abort the feotus. ...read more.

Immanuel Kant?s theory could be used to view the immorality of abortion. According to the Kant theory, a decision should be made because it is in fact the right thing to do regardless the amount of people who will be benefiting from it. Thus, Kant would have been against the act of abortion since taking responsibility of the child, which has been conceived through the parents? actions, would have been the right thing to do. Kant also argues that in making moral decisions we should act in a way that recognizes the objective importance of every other individual. Therefore, the argument against abortion can be stated by the syllogism, ?It is wrong to kill an innocent human being A human feotus is an innocent human being Therefore it is wrong to kill a human feotus? Abortion is a personal and controversial issue that does not have a definite status on morality. A single decision on whether abortion is a moral act or an immoral one cannot be made because there are many relevant factors, such as the humanity of a feotus, which needs to be taken into consideration. Each individual, however, can take their own stand on the issue based on their own perspective and beliefs. ...read more.