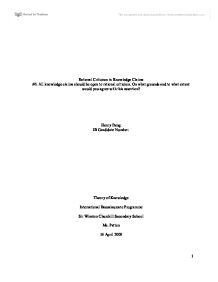 All knowledge claims should be open to rational criticism. On what grounds and to what extent would you agree with this assertion?

Rational Criticism in Knowledge Claims #6: All knowledge claims should be open to rational criticism. On what grounds and to what extent would you agree with this assertion? Henry Deng IB Candidate Number: Theory of Knowledge International Baccalaureate Programme Sir Winston Churchill Secondary School Ms. Patton 16 April 2009 Henry Deng Ms. Patton IB TOK 11 16 April 2009 Criticism, as proposed by Karl Popper, is "the lifeblood of all rational thought." At a first glance, one may agree with this because by critically questioning or evaluating the validity of a knowledge claim through reason, it can provide one with certainty and truth. However, the assertion that: "All knowledge claims should be open to rational criticism" gives us an alternative judgement as the word "should" is not definitive and this perhaps suggests that it is necessary to consider other viewpoints. Through inductive and deductive reasoning, we can test knowledge claims and indicate the grounds of which the claim is based on. Yet, as evidenced by Victor Johnson's hedonic tone theory and the notion of altruism, emotion plays an important role in our reasoning process which asks the question of whether rational criticism is free of these emotional motives. In mathematics, people tend to accept knowledge claims like: the sum of a triangle's internal angles is equal to 180 degrees, without a rational basis. ...read more.

To further illustrate my point, a panel of referees published Hale's proof of Kepler's sphere packing conjecture (by packing balls using the face-centred cubic method, it will create the highest average density) even though it was only 99% certain. (par. 13) The acceptance of even the smallest uncertainties, show that reason alone may actually be a hindrance to mathematics because we cannot, or simply do not have the time, to evaluate the truth of every knowledge claim - as established before, sometimes these truths cannot be provable. When emotions such as curiosity are present with the reasoning process, mathematicians are able to tweak pre-existing proofs with their own cognitive abilities and although complete certainty may not be achievable, high precision can be obtained. Although math once followed the concept of rigorous proof, modern math has changed. Due to the limitations of deductive reasoning, some mathematicians have claimed that instead of proofs, abstract concepts such as real life situations can be modelled with computer-run experiments. Certainty may still be possible without rigorous proof but as of yet, it is too early to identify the flaws embedded in computer technology. An area of knowledge that is usually regarded as less certain than mathematics or the sciences is the arts. When one watches an episode of American Idol (a singing competition), one may wonder if claims related to a contestant's singing can be criticized with appropriate grounds. ...read more.

The judges of American Idol use a similar process: when a number of contestants possess similar abilities, they employ emotions such as amazement or curiosity, to decide which singer has the personality of a "superstar". One interesting point about art is that it can describe the world in a plethora of ways, from experiences in the physical world to the supernatural. Due to this abstract nature, many people have claimed that art can provide important insight into the way we understand the world through interpretation. This indicates that knowledge gained through subjectivity is not always unreliable, and perhaps there is an element of certainty gained instead. Although we can evaluate knowledge claims in the arts, other ways of knowing should be considered during processes of reasoning. Pythagoreans thought that only rational numbers existed in mathematics. After taking the square root of two, they realized that there were also irrational numbers and as a result, one of their fundamental truths was broken. As can be seen, when emotion, language, and perception are combined with the reasoning process, we can acquire truths through not only objectivity but also subjectivity. Knowledge claims in mathematics and the arts can be open to rational criticism, but reason alone may actually prevent the progress of both areas. By referring to this information, it is likely that these trends will occur in the other areas of knowledge. ...read more.