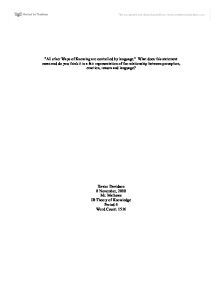 &quot;All other Ways of Knowing are controlled by language.&quot;

What happens when a Pintupi tribesperson comes to visit me and sees a "manhole" - the opening in the street through which maintenance workers pass when they are repairing the sewer system. Might he mistake it for a very large yulpilpa? The second knowledge issue raised by this prompt involves the role of language in emotional knowing. Surely I would feel emotions in the absence of any particular language; anger and sadness are universal features of human existence. One of our case studies this year involved Genie, an abused young woman who grew up being punished every time she spoke. This treatment lasted 13 years until she escaped her father's abuse and was "rescued" by linguists and other researchers in 1971. (Nova, Genie) After years of study with Genie researchers established that she could understand words and their meanings, but she was never able to construct functional English sentences. Even after extensive therapy and study, Genie never learned to use language the way normally functioning humans who live in society use it. Yet the footage shown in the Nova video about Genie shows that she clearly had strong emotional states. One of her foster parents even got her to describe her anger or fear using her fingers - four fingers meant she was very upset, one finger meant only a little upset. ...read more.

We may never know for sure - there are inherent limits involved in knowing the true thought patterns even of people well known to us, much less strangers from an obscure tribe. But the performance of the Piraha on these cognitive tests suggests that the language we speak (and in which we think) does limit our reasoning ability. Still, to assert that language "controls" reason as a Way of Knowing goes beyond the evidence provided by this example. The Piraha showed no evidence of being incapable of reason, only of specific cognitive tasks. Language plays a role in each Way of Knowing, but to say that it controls them is not a fair representation of this complex and nuanced relationship. Language both aids and limits perception, it can contain and channel emotion and it provides the framework for reason. One could argue more fairly that language enhances the other Ways of Knowing by providing categories and "short cuts" of interpretation. Ironically even this argument is subject to a problem of circularity; because I think predominantly in language I naturally see great importance to its role in knowing. In the end all we can do is recognize that the four Ways of Knowing are largely interdependent, and that language, perception, emotion and reason work together in allowing us to make and validate our knowledge claims. ...read more.