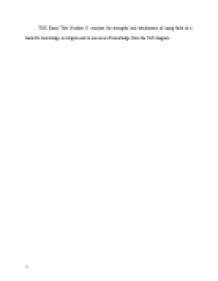 ﻿TOK Essay Title Number 8: Analyse the strengths and weaknesses of using faith as a basis for knowledge in religion and in one area of knowledge from the ToK diagram. Using faith as a method for gaining knowledge was always questionable and unconvincing. As defined in the bible (English standard version 2001), Faith, a vital aspect in this area is ?Now faith is the assurance of things hoped for, the conviction of things not seen.? However, faith is an assured credence that is not dependent upon substantial testimony or rational data. My intention is to exhibit that faith is a justifiable method of gaining knowledge in Religion but has confines and precincts in the more corroboration based Natural Science. Religion is a divine sphere of influence that depends largely upon the axioms consequential to faith. This faith can be derived via absolute belief in an authority (like a prophet) or through a sacred anxiety, rather than evidence or rational grounds. Of late, people have started relying largely upon matters that are supported by the existence of proof or a reasonable explanation to verify its validity and assurance. Faith is now a ?fallible? suggestion as people plainly do not regard it to be a fundamental method of gaining knowledge with the lack of any supporting evidence. ...read more.

To explore the topic further, the drawbacks and weaknesses of using faith as a way of knowing in Religion must be taken into account. Some people state that if faith is accepted as a lawful way of knowing, the world will become full of turmoil and disorder. This is due to the fact that faith is very ambiguous; it depends largely upon traditions, cultures, experiences and ones upbringing. If I was born and brought up in Greece with Greek culture, I would probably believe in the existence of Erebus, the God of darkness, and Aphrodite, the Goddess of love. Consumption of beef is something extremely normal amongst the Muslims; however, the same act arouses a sense of rage amongst the Hindus as the cow is considered to be a holy animal. When people connect religious experiences with their own culture and customs, they are biased when it comes to private incidences, gives rise to a sense of vagueness depending upon how the person feels and responds. However, one can also declare that our faith is something ?we perceive so deeply within ourselves as true that we don't have to discuss it, and no matter what anyone else says about it, it does not alter our reality. ...read more.

Moreover, if I spend my money and send my phone to the repairs, where professionals will be dealing with the issue, there is a higher probability that my phone will start working again. This is because the professional will be using basic scientific methods to solve the problem and fix my phone. As discussed earlier, personal knowledge, that is different for different people, can be shared via the use of faith. Hence, we need basic universal presuppositions to form an absolute structure of knowledge. Wrapping up, I would like to say that Faith does play a crucial role as a way of knowing in the area of Religion, where everything is based on bias and perception, the two aspects directly linked to faith as they are private knowledge. Religion is something that comes from personal experiences and from within and that?s where faith is extremely vital. Furthermore, Faith acts as a foundation or base in all areas of knowing, Mathematics and Natural Science as well. The basic axioms of Mathematics and Natural Science are purely based on Faith, which led to us knowing all that there is in these fields today. However, overall, it causes more ambiguity and confusions and the world cannot rely upon faith alone. Justifications and evidences are also extremely essential, especially in areas of knowing such as Natural Science and Mathematics. ...read more.