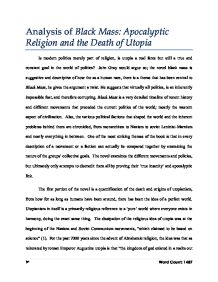 Analysis of Black Mass: Apocalyptic Religion and the Death of Utopia

Analysis of Black Mass: Apocalyptic Religion and the Death of Utopia Is modern politics merely part of religion, is utopia a real farce but still a true and constant goal in the world of politics? John Gray would argue so; the novel black mass is suggestive and descriptive of how the as a human race, there is a theme that has been central to Black Mass, he gives the argument a twist. He suggests that virtually all politics, is an inherently impossible feat, and therefore corrupting. Black Mass is a very detailed timeline of recent history and different movements that preceded the current politics of the world; mostly the western aspect of civilization. Also, the various political factions that shaped the world and the inherent problems behind them are chronicled, from monarchism to Nazism to soviet Leninist-Marxism and nearly everything in between. One of the most striking themes of the book is that in every description of a movement or a faction can actually be compared together by examining the nature of the groups' collective goals. The novel examines the different movements and policies, but ultimately only attempts to discredit them all by proving their 'true insanity' and apocalyptic link. The first portion of the novel is a quantification of the death and origins of utopianism, from how for as long as humans have been around, there has been the idea of a perfect world. ...read more.

Thirdly, John Gray viciously attacks the use of present social pseudo-paradigms, which give way to governments lying about the past to gain power by fear rather than terror. In current times, a very relevant example of disinformation is "the notion that Islam lies outside 'the West'" (71) which "neglects Islams positive contributions" such positive effects are that the "Islamic rulers provided shelter for persecuted Christians and Jews" (71) "in Moorish Spain" (71). In terms of paradigms, "'the West' stands for nothing fixed" (73), since "its boundaries shift with cultural changes and geo-political events." (73) The ongoing issue with the misuse of paradigms is that the former paradigm that a monarchy is the just way to govern to the modern political paradigm of "liberal democracy and human rights" (73). The entire reasoning for the attacking of Islam is biased because according to Gray the rational paradigm shift of 'the West' another group is attacked for having a different paradigm. Utopianism has come a long way from being religious then radical, then secular, and finally to mainstream. The "belief that a single economic system was coming into being throughout the world" (74) was the prominent sentiment throughout the 1980s in Western governments has given a new political ideal that resulted in neo-conservatism as embodied in leaders like Tony Blair, whose dangerous assertion: "I only know what I believe" (93), leaves much to be desired in terms of factuality and rationalism. ...read more.

"Any country can achieve democracy, and any can lose it" (170), is the current situation of America, where in attempting to spread American-style democracy, it has compromised its' own from within. Wherever America sets its foot attempting to spread its' 'utopia', it leaves in its wake "another failed state" (182), since this phenomenon is ongoing and "the apocalypse failed to arrive, [and] history went on as before but with an added dash of blood" (183); which is merely a "symptom of a mentality" (183) promoted by modern utopians. At the end of the novel and the end of modern history, it seems that no matter how utopia is spread or implemented, there is always a problem that ends in great bloodshed, indifferent and delusional paradigms, even 'pseudo-truths' that 'the Western world' now so steadfastly believes. Gray is very crafty in showing the underlying trends of destruction involved in the history of the realisation of political ideals. Whether 'faith-based' or 'science-based' directives are followed, a similar result follows suit. As shown, the blind acceptance of utopian ideas is corrupting in nature. But so, too, can be the blind rejection of Utopianism. After all what could be more corrupting than accepting as inevitable problems that may occur in the attempt the task of creating an impossible utopian society. For this, Gray uses the history to show that living within your means and within reality is essential to the survival of a seemingly just society, and also that history repeats itself. ?? ?? ?? ?? 1 Word Count: 1487 ...read more.