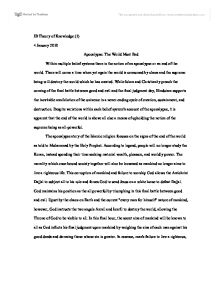 Apocalypse: Why the World Must End

IB Theory of Knowledge (1) 4 January 2010 Apocalypse: The World Must End Within multiple belief systems there is the notion of an apocalypse or an end of the world. There will come a time when yet again the world is consumed by chaos and the supreme being will destroy the world which he has created. While Islam and Christianity preach the coming of the final battle between good and evil and the final judgment day, Hinduism supports the inevitable annihilation of the universe in a never-ending cycle of creation, sustainment, and destruction. Despite variations within each belief system's account of the apocalypse, it is apparent that the end of the world is above all else a means of upholding the notion of the supreme being as all-powerful. The apocalypse story of the Islamic religion focuses on the signs of the end of the world as told to Muhammad by the Holy Prophet. ...read more.

In essence, man's failure to live a righteous, God-fearing life leads one to sin and temptation, spurring the ultimate battle between good and evil in which God triumphs. Angered with the ensuing chaos, God ultimately destroys Earth, inflicts his final judgment upon mankind, and damns those who have betrayed him. It is God's ability to destroy the very earth which he created and damn those who have betrayed him which preserves his position as the almighty. Similarly within Christianity, the Revelation of John centers around the arrival of the Antichrist or the Beast 666 and "the final battle of the end." During this battle the faithful and true rider of the white horse, Jesus, will bring with him the Word of God as he triumphs over the Beast 666. Once again, God intervenes in the ensuing chaos and in his presence the Earth and sky vanish and the dead stand before his Great White Throne. ...read more.

Brahma then sends a wind that drinks up the waters and covers the Earth in watery chaos, the primordial state from which a new world can be created. The creation, sustainment, and destruction cycle within the Hindu apocalypse myth once again maintains the status the supreme being, or in this case supreme beings, as the almighty through the continuous role of Brahma, Vishnu, and Shiva in each of their domains. Overall, it is apparent that within the destruction myths of each belief system the world must end. Within Islam this is demonstrated through God's destruction of the world and final judgment of mankind. This notion holds true again in Christianity which preaches God's role as "the Alpha and the Omega, the Beginning and the End" through his recreation of heaven and Earth. Likewise, Hinduism teaches the inevitability of the destruction of the universe in the cycle of creation, sustainment, and destruction. The world must, thus, end in order to maintain the position of the supreme being as almighty since he is the only one capable of destroying it. ?? ?? ?? ?? 2 ...read more.