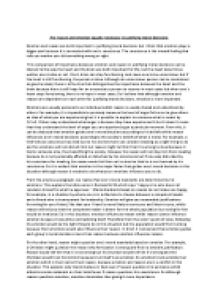 Are reason and emotion equal in justifying moral decisions?

﻿Are reason and emotion equally necessary in justifying moral decisions Emotion and reason are both important in justifying moral decisions but i think that emotion plays a bigger part because it is connected with one?s conscience. The conscience is the inward feeling that tells you wether you did something wrong or right. This comparison of importance between emotion and reason in justifying moral decisions can be likened to the way the heart and the brain are both important for life, but the heart determines wether one is alive or not. One?s brain can stop functioning and cause one to be unconscious but if the heart is still functioning, the person is alive. Although an unconscious person can be considered as good as dead, there is a fine line that distinguishes the importance between the heart and the brain because there is still hope for an unconscious person to recover in most cases but when one?s heart stops functioning, there is no hope in most cases. ...read more.

he approves.? Moral standards based on reason do not make one happy, for example, in a situation by where one is in a dilemma to choose between a competent leader and a friend who is incompetent for leadership. Emotion will give you reasonable justifications for voting for your friend, like that your friend is more likely to serve you and listen to you, whilst reason will tell you that the competent leader is better for the whole population but voting for him would be irrational. So in this situation, emotion influences reason whilst reason cannot influence emotion because it would be contradicting itself. Therefore from the voter?s point of view, following his emotion would be the right thing to do in this situation but the population would find it wrong because their emotions would also influence their reason. In brief, it is observed that emotion guides each group?s moral decisions more than reason because emotion influences reason. On the other hand, reason might question one?s moral standards based on emotion. ...read more.

For example if a hardworking rich man lives an extravagant lifestyle in a very poor and lazy community without even trying to help them, from a reason?s perspective it is right because he worked hard for what he has while they didn?t ,but it would be considered morally wrong because he is able to help the hunger-stricken community but he does not. On the other hand, if the rich man is fully emotional and works hard for the whole community for the rest of his life whilst they are idle, it would be unfair because the community is able to work but it decides to exploit the rich man. So this shows that emotion and reason are interdependent in terms of making moral decisions, too much of emotion or reason can be immoral. So although one might argue that emotion and reason are equally necessary for making moral decisions because they are interdependent, i still believe that emotion has more importance because it subdues reason in most cases of making moral decisions, just the way a car and a human being are interdependent for faster travelling so are emotion and reason interdependent but the human being and the emotion are more important. ...read more.