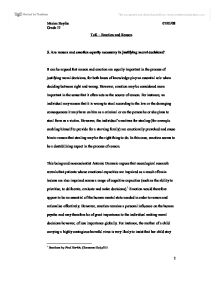 Are Reason and Emotion Equally Neccessary in Justifying Moral Decisions?

ToK - Emotion and Reason 3. Are reason and emotion equally necessary in justifying moral decisions? It can be argued that reason and emotion are equally important in the process of justifying moral decisions, for both bases of knowledge play an essential role when deciding between right and wrong. However, emotion may be considered more important in the sense that it often acts as the source of reason. For instance, an individual may reason that it is wrong to steal according to the law or the damaging consequences it may have on him as a criminal or on the person he or she plans to steal from as a victim. However, the individual's motives for stealing (for example enabling himself to provide for a starving family) are emotionally provoked and cause him to reason that stealing may be the right thing to do. In this case, emotion seems to be a destabilizing aspect in the process of reason. This being said neuroscientist Antonio Damasio argues that neurological research reveals that patients whose emotional capacities are impaired as a result of brain lesions are also impaired across a range of cognitive capacities (such as the ability to prioritise, to deliberate, evaluate and make decisions).1 Emotion would therefore appear to be an essential of the human mental state needed in order to reason and rationalise effectively. ...read more.

The mother's moral decision is justified by reasoning that the child would live if he is given to the other woman. It can be argued that the mother's inward-looking emotion of fear causes her to 'draw into herself' and reason this. This argument would cohere with scientist Edward O. Wilson's definition of emotion 'the modification of neural activity that animates and focuses mental activity'.2 On the other hand, it can also be argued that her emotional experience (feelings corresponding to physiological changes such as increased heartbeat, the release of adrenaline etc)3 is in fact provoked by this reasoning. Either way, the woman would have undoubtedly not made the decision to save the child's life had she not been subjected to certain emotions. The decision being justified by emotions, Solomon realises that she is mother of the child and grants her the baby. In retrospect, the other woman's lack of impulsive emotions allows her to remain indifferent to the consequences for the child in the situation. Solomon's decision is however purely based on his logical opinion of who appears to be the real mother. Therefore reason is valued over emotion in his moral judgement. Having interpreted this story, it would appear that emotion is part of the human psyche which initiates instinctive reaction. ...read more.

When evaluating judgements made collectively in a social environment, it would appear that reason holds a greater significance over emotion when coming to a moral decision. For instance, A BBC News headline last updated in 2003 reports that 'The jury in the trial of a mother accused of killing her three babies has been told not to let emotion rule reason when coming to a decision.'6 This suggests that when moral decisions lie in the hands of the court, it is preferred that the verdict be based upon reason rather than emotion. In other words, the jury is expected to suppress their emotions towards the case in order to have a clearer analytical perspective of the facts or evidence presented before them. This acknowledges the idea that emotions are in power of undermining diagnostic thought and therefore influencing the making of erroneous decisions. It is therefore possible to conclude that emotions are more dominant than reason in justifying a moral decision. However, reason may be judged more relevant than emotion when making judgement. Word Count : 1,274 1 Emotions by Paul Harkin, (Resource file) p315 2 What is an emotion? (class sheet) p297 3 Emotions by Paul Harkin, (Resource file) p315 4 Emotions by Paul Harkin, (Resource file) p314 5 Emotions by Paul Harkin, (Resource file) p314 6 http://news.bbc.co.uk/1/hi/england/berkshire/2969316.stm ?? ?? ?? ?? Marina Beyiha 07/01/08 Grade 11 1 ...read more.