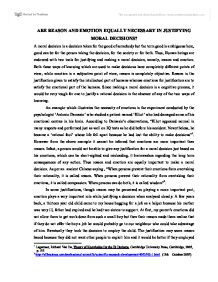 ARE REASON AND EMOTION EQUALLY NECESSARY IN JUSTIFYING MORAL DECISIONS?

ARE REASON AND EMOTION EQUALLY NECESSARY IN JUSTIFYING MORAL DECISIONS?

A moral decision is a decision taken for the good of somebody but the term good is ambiguous here, good can be for the person taking the decision, for the society or for both. Thus, Human beings are endowed with two tools for justifying and making a moral decision, namely, reason and emotion. Both these ways of knowing which are used to make decisions have completely different points of view; while emotion is a subjective point of view, reason is completely objective. Reason is the justification given to satisfy the intellectual part of humans whereas emotions for justification are to satisfy the emotional part of the humans. Since making a moral decision is a cognitive process, it would be very tough for one to justify a rational decision in the absence of any of the two ways of knowing.

An example which illustrates the necessity of emotions is the experiment conducted by the psychologist ‘Antonio Damasio’ who studied a patient named ‘Elliot’ who had damaged some of his emotional centres in his brain. According to Damasio’s observations, “Elliot appeared normal in many respects and performed just as well on IQ tests as he did before his accident. Nevertheless, he became a ‘rational fool’ whose life fell apart because he had lost the ability to make decisions”[1]. However from the above example it cannot be inferred that emotions are more important than reason. Infact, a person would not be able to give any justification for a moral decision just based on his emotions, which can be short-sighted and misleading, it brainwashes regarding the long term consequences of any action. Thus reason and emotion are equally important to make a moral decision. As per an  ancient Chinese saying , “When persons prevent their emotions from overtaking their rationality, it is called reason. When persons prevent their rationality from overtaking their emotions, it is called compassion. When persons can do both, it is called wisdom”[2].

In some justifications, though reason may be perceived as playing a more important part, emotion plays a very important role while justifying a decision when analysed closely. A few years back, a thirteen year old child came to my house begging for a job as a helper because his mother was very ill, father had expired and he had two sisters to support. At first, my parent’s emotions did not allow them to get work done from such a small boy but then their reason made them realize that if they do not offer the boy a job he would probably go to our neighbour who could take advantage of him. Eventually they took the decision to employ the child. The justification may seem reason based because they did not want other people to exploit him and it would be better if they employed him and helped his family. But when analyzed it involves a lot of emotions too. My parents employed the child because they sympathize and cared for him, both of which are feelings and feelings are nothing but emotions.

Sometimes emotions gives rise to reason but ultimately both are equally required to justify a moral decision. According to the correspondence theory something is true if it agrees with the facts. Now it is fact that Honour crimes which are practiced in many parts of the world cause great torture and pain to the women. It is also a fact that torture without a moral reason is unethical then it is a fact that Honour crimes are immoral. However at the centre of the justification lies the idea of imposed pain. Pain is a feeling and feeling an emotion. So it is necessary that one must have emotions to realize that reason for justification is required in some cases. For justification that honour crimes should be discontinued one gives the reason that it is immoral since all humans have their own freedom and no one has the right to cause someone pain. Hence it is seen that both emotion and reason are interweaved and a decision cannot be made without any of the two, hence both are equally important to justify.

Even though an emotion stimulates a reason for justification in some cases, it does not mean that emotion would be more important out of the two. Reason helps us to distinguish between the good and the bad emotions (as the good emotion does not necessarily lead us to make a moral decision) and without it one would not be able to justify a moral decision. Suppose I am in a situation where I have to choose between my brother, who is selfish, uneducated, and rich, and another person who is poor, educated, and noble but my enemy, for the mayor election. If I take the decision based on my emotions, I would choose my brother because I love him and hate the other contestant. Love is a good emotion and hatred is a bad emotion. In this case if I go with my good emotion, I would not make a moral decision and it is here that reasoning comes in; my reasoning power would help me too distinguish between the good and bad emotions and justify my decision making it a moral decision.

Emotions may brainwash us and lead us to make a decision only considering the immediate consequences. If I see a group of people hitting a boy, I might be urged to help the boy due to my emotions, but little do I actually realise then, that if I go to help the boy I could also get beaten up. This shows that emotional reasons cannot actually help justify a decision one has to use reason too.

Even in places where one is not emotionally attached to a person, both, reason and emotion are required to justify a decision. Take the example of law in the area of human sciences. A judge has to take a decision to convict a criminal who is mentally challenged for committing a homicide. He makes his decision based on a justification which involves both reason and emotion. His reasoning is that if he lets that criminal go he/she would kill more people as one cannot trust a mentally challenged person and this reasoning also includes emotions. The judge convicts the criminal because he loves the people of his state and does not want the criminal to harm them, thus uses both reason and emotion equally to justify a moral decision.

A justification of a moral decision does not necessarily mean that it justifies a decision to be taken in the future; one can also justify a decision which was taken in the past. If such type of justification is to be made, one needs enough evidence to support a reason and should be able to realise the emotions of the people or a person at the time when the decision was taken since emotion like weather changes often. If one needs to justify a historical decision then one should have enough evidence regarding that decision and one should also be able to understand and compare the emotions of the people.

Since making moral decision is a cognitive process and involves a lot of objectivity and subjectivity it can be moral for someone whereas immoral for another. In history, Hitler ordered the extermination of Jews, it was a moral decision for his own good with the reason that the Jews were a piece of wood and emotional reason that his father was a Jew, and the Nazi’s justified the decision not by using their own emotion or reason but by taking the reason of Hitler or say an order by him, because they were emotionally attached to him as he was their authority. The above example also shows that though the justification by the Nazi’s involved both reason and emotion equally, it was not moral for the rest of us.