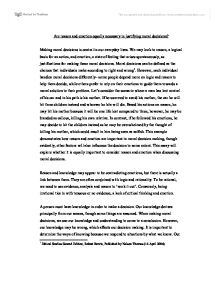 Making moral decisions is central in our everyday lives. We may look to reason, a logical basis for an action, and emotion, a state of feeling that arises spontaneously, as justifications for making these moral decisions. Moral decisions can be defined as the choices that individuals make according to right and wrong[1]. However, each individual handles moral decisions differently– some people depend more on logic and reason to help them decide, while others prefer to rely on their emotions to guide them towards a moral solution to their problem. Let’s consider the scenario where a man has lost control of his car and in his path is his mother. If he swerved to avoid his mother, the car he will hit three children instead and whoever he hits will die. Based his actions on reason, he may hit his mother because it will be one life lost compared to three, however, he may be branded as callous, killing his own relative. In contrast, if he followed his emotions, he may decide to hit the children instead as he may be overwhelmed by the thought of killing his mother, which could result in him being seen as selfish. This example demonstrates how reason and emotion are important in moral decision making, though evidently, other factors will also influence the decision to some extent. This essay will explore whether it is equally important to consider reason and emotion when discussing moral decisions.

Reason and knowledge may appear to be contradicting emotions, but there is actually a link between them. They are often conjoined with logic and rationality. To be rational, we need to use evidence, analysis and reason to ‘work it out’. Conversely, being irrational ties in with tenuous or no evidence, a lack of critical thinking and emotion.

A person must have knowledge in order to make a decision. Our knowledge derives principally from our senses, though some things are assumed. When making moral decisions, we use our knowledge and understanding to come to a conclusion. However, our knowledge may be wrong, which affects our decision making. It is important to determine the ways of knowing because we respond to situations by what we know. Our knowledge and understanding needs to be justified, for example, George can say that he wants to see a particular film; he would need to have a good reason in order for him to know. On the other hand, emotion adds feelings to knowledge. It affects what you believe in and how you react to it.

Knowledge has to be objectively right and you must believe that it is true. For example, if a person who believed the world is flat later finds out that he was wrong as the world was actually round, he would have to admit that he did not know, he only thought he knew. Therefore, good evidence is needed to to support the statement for it to be knowledge.

A problem of knowledge is that when we act by what we know; we tend to let our biases interfere with our decisions. Emotion is needed in making moral decisions but reason is needed to justify moral decisions. Reason and emotion are often seen as opposing aspects. Emotions are subjective to each individual and situation whereas it can be argued that reason is absolute. A teleological theory is the view that believes moral decisions should be made according to the ends. Therefore, the theories deal with reason rather than emotion. An example of a teleological theory is utilitarianism, which believes that everyone’s aim is to be happy and to avoid pain[2]. It sees ‘good’ as the act which brings the maximum amount of happiness for the maximum amount of people[3]. Let’s take the example of torturing a prisoner for information on the whereabouts of a bomb which would ultimately kill many people. If the prisoner is tortured, the result would be many people avoiding pain compared to one suffering, therefore it is logical. However, there are implications in this as it assumes that emotion does not play a role in the decision making. Emotion may play a role in this situation as a want not to inflict pain on the prisoner. Without, emotion, people may be ruthless. Therefore, it is important to have an equal balance of reason and emotion when making moral decisions.

Emotion tends to be seen as a problem for knowledge rather than a source of it.[5] Therefore it is hard for a person that has strong feelings of emotion to think reasonably. Let’s take the example of a man that is angry that his wife had an affair, he may act irrationally and choose to threaten her with a knife. This act would surely be classified as morally wrong as he is inflicting suffering upon another person. Additionally, his reasoning is clearly clouded by his emotions. Therefore emotion should not be in excess when making moral decisions and we should be reasonable rather than emotional. It is possible that the man may calm down later and regret his actions.

There may be some cases where we are split between two choices, where reason tells us one thing, and emotion tells us another. For example, there is a young girl in hospital on a life support machine and her parents are given the decision whether to switch it off. Reason may tell them that the machine may be needed by someone else, but on the contrary, emotion may influence them not to because, effectively, they are letting their daughter die. It is evident that it is more practical to switch off the machine so it could be used by someone else, which again shows that emotion should not be in excess when moral decisions are made.

In conclusion, it has been shown that there must be a balance of reason and emotion, so they are both equally important when justifying moral decisions. Emotions are natural to us, but we tend to be biased to what we believe which makes it a problem in our decision making. Reason is needed to justify the moral decision; both aspects are in fact compatible with each other when they are in balance.